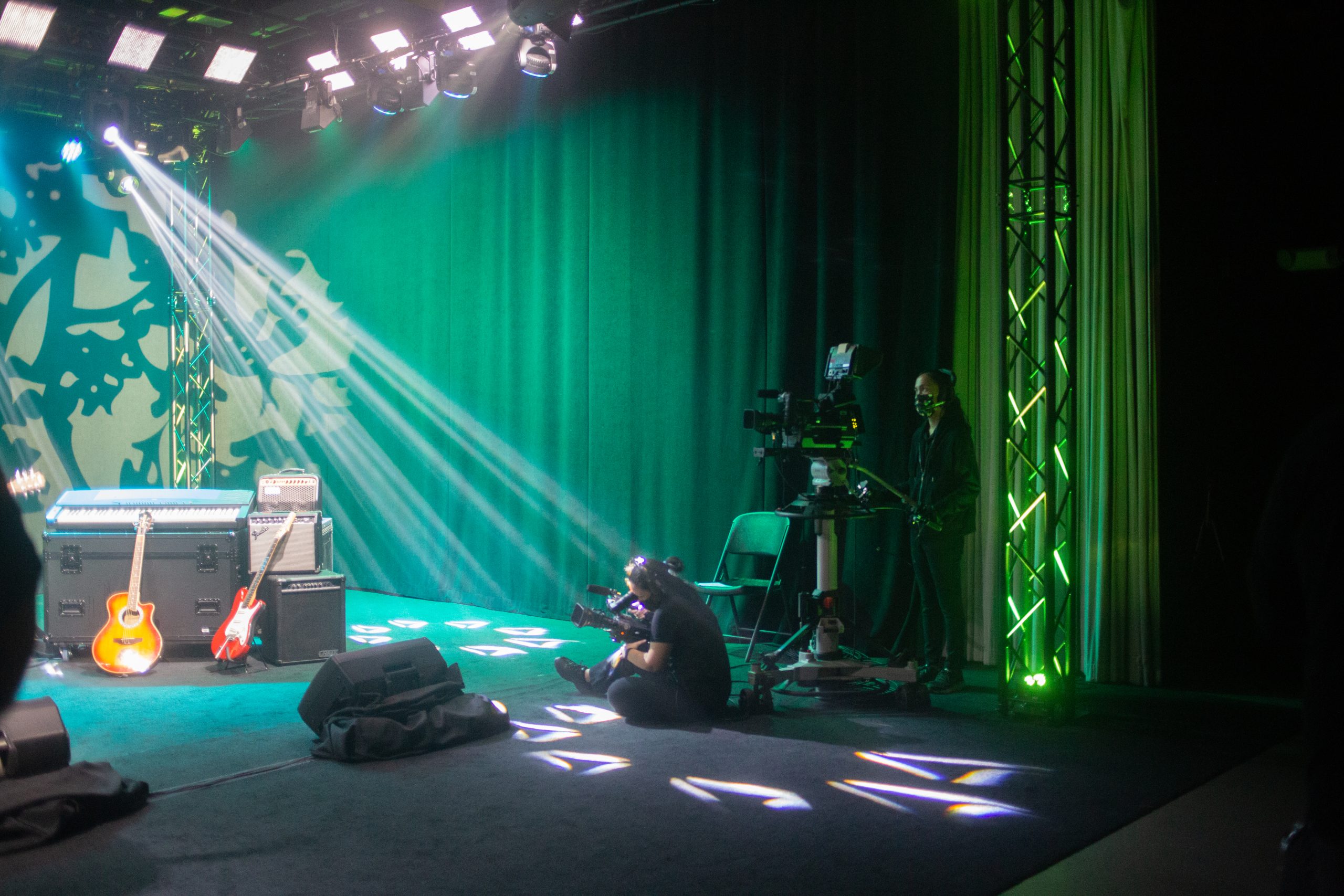 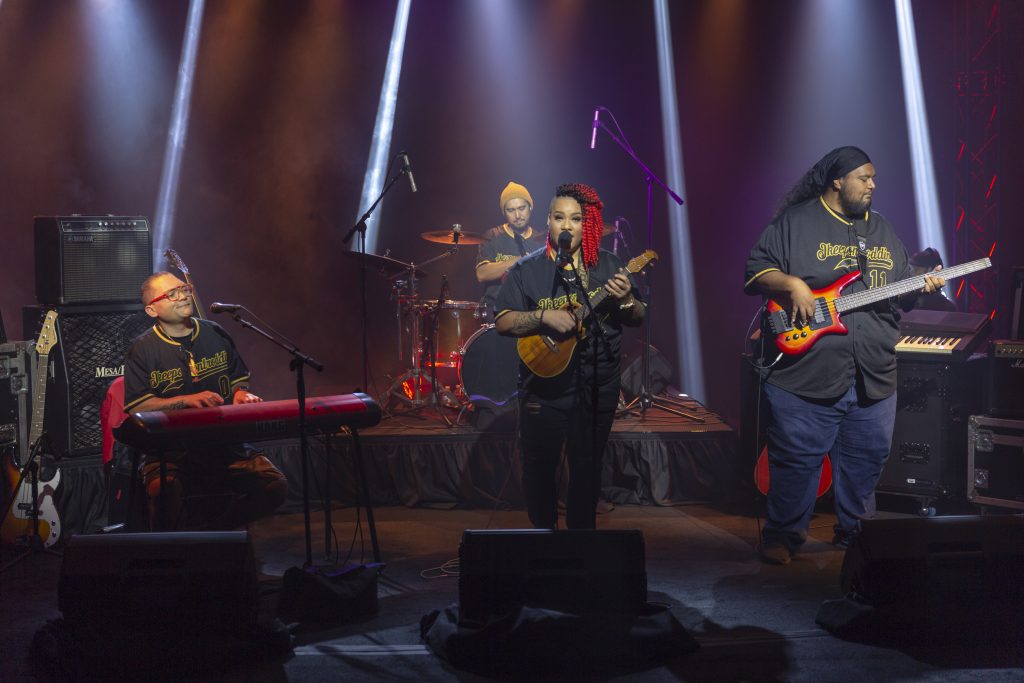 On the last shoot day of Mele Aʻe‘s second season, a comforting sense of alleviation permeated the Māpunpuna studio’s chilly double AC-filled atmosphere. The re-occurring television series that invited up-and-coming local musicians to perform their original songs in our newly renovated Studio 1122 was ʻŌlelo’s most ambitious signature program yet. The first season, which ran from February through May 2021, allowed our production team to get their feet wet with the studio’s new capabilities, including a complex digital lighting rig and an intricate audio scheme. With 4 episodes under our belt from our “maiden voyage”, Season 2 presented us with an opportunity to tinker with the format by experimenting with new concepts and adapting to unforeseen developments.

Trishnālei and her band during one of five takes.

During the seasonal hiatus, Production Manager and Mele Aʻe showrunner Kekoa Graham sought to refine the workflow and refresh the show both visually and pacing-wise. Extensive cross training was provided to every member of Kekoa’s team, which consists of members of ʻŌlelo’s Production Department and Media Service Centers, lending to a greater understanding of the show as a whole for all involved.

Still in the midst of a global pandemic, yet during a time of eased restrictions, Kekoa and team “once again found [themselves] at a wonderful juncture, where concerts were becoming a thing again.” This was great news for all the talented artists invited to play on the show, who for months had been starving for opportunities to perform their music to an audience again. We are so glad that work opportunities were reopening for a lot of potential musicians, sound engineers, and lighting operators, which just meant that we had to adjust our approach to securing talent. “We were able to partner with some really amazing musicians and professionals who were truly committed to the ideals behind Mele Aʻe,” Kekoa reflects. “And they all came through in the end to make some top-notch shows.” 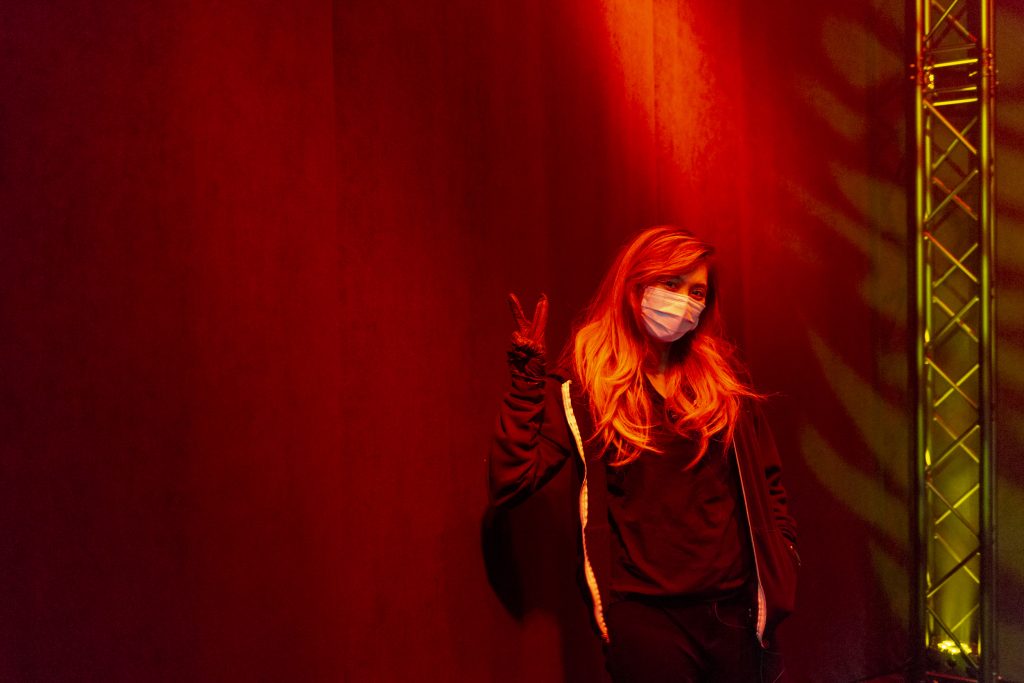 One crucial position in the crew is the lighting operator. Anne Fontanilla of the Māpunapuna MSC stepped in this season to helm the highly sophisticated digital lighting board, which came with a slew of responsibilities.

Anne’s job begins immediately as musical performers are selected and announced by the show’s producers (usually about a month out from their shoot date). In order to precisely plot out effective and unique lighting cues, Anne studies each artist’s pre-existing music, lyrics, photographs, and biographies. These elements help Anne account for their rhythm, performance style, heights, and any other physical traits that tailored lighting could compliment.

Anne works closely with the show’s director, Jon Wong, establishing some standard lighting rules. Anne says, “Solos and duos or any slow song shouldn’t really have a lot of motions and it should complement the rhythm. Bands or any fast-tempo songs, should have more motions and also more light effects due to the possible changes from verse to chorus, bridge, etc.”

Like the lighting cues, Mele Aʻe applies particular cinematography techniques in order to amplify each musician’s performance. The show wouldn’t be half as exciting without those gloriously smooth sweeping establishing shots, achieved by jib operator Thomas Collins. A jib functions a bit like a see-saw, using counterweights to balance a camera mounted on a crane.

Thomas Collins secures his camera at the end of the jib arm.

“I already have a front row seat to some amazing music, but as the jib operator, I am blown away by all the amazing shots I can get.” Thomas explains, “I love how high risk/high reward the jib can be. Either you miss the shot and lose a magical moment forever, or you get the shot the first time, which can be a very rewarding experience.”

Thomas and the rest of the crew agree that Mele Aʻe is getting bigger and better, which also means more technical challenges. Thomas articulates, “I think the way we overcame these major technical issues and time constraints was mostly due to sheer luck, that every person working on the production was highly trained in a multiplicity of technical areas and that we were all so passionate.” 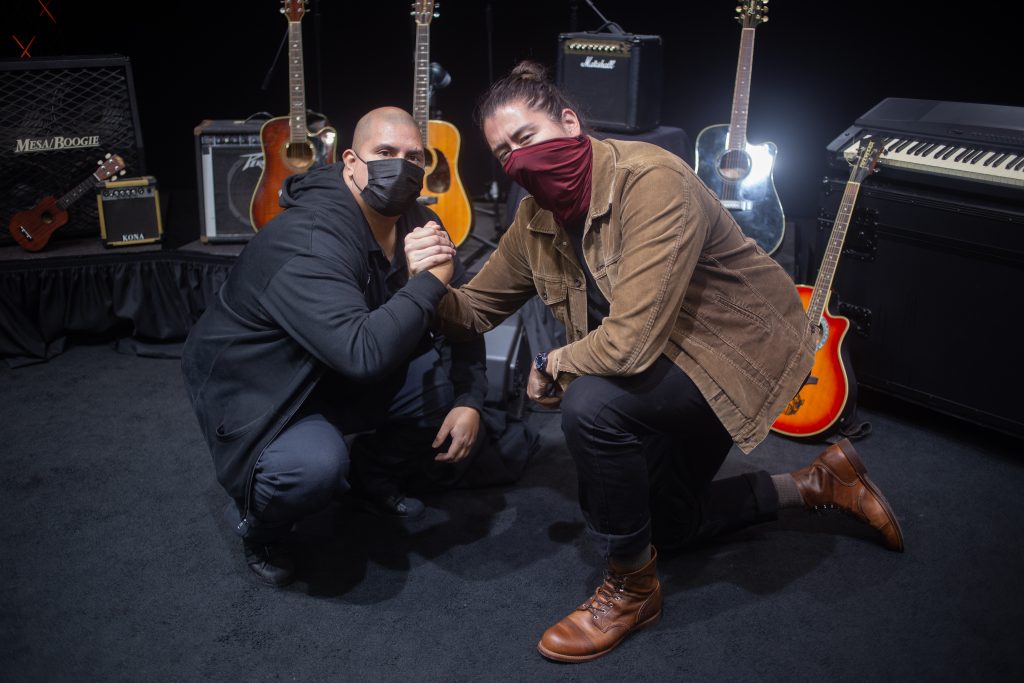 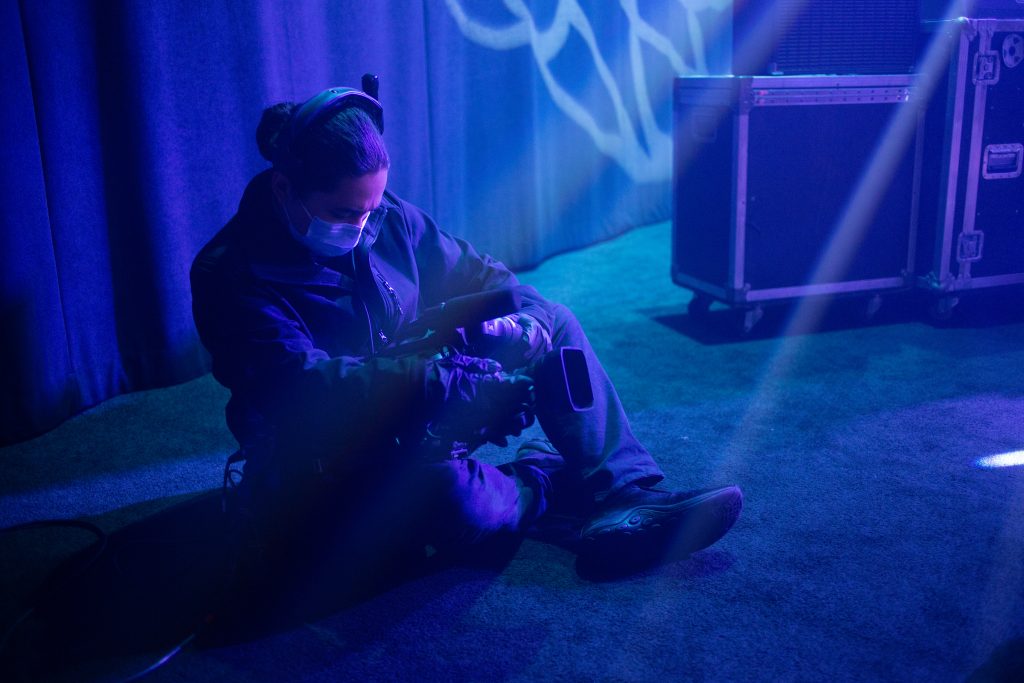 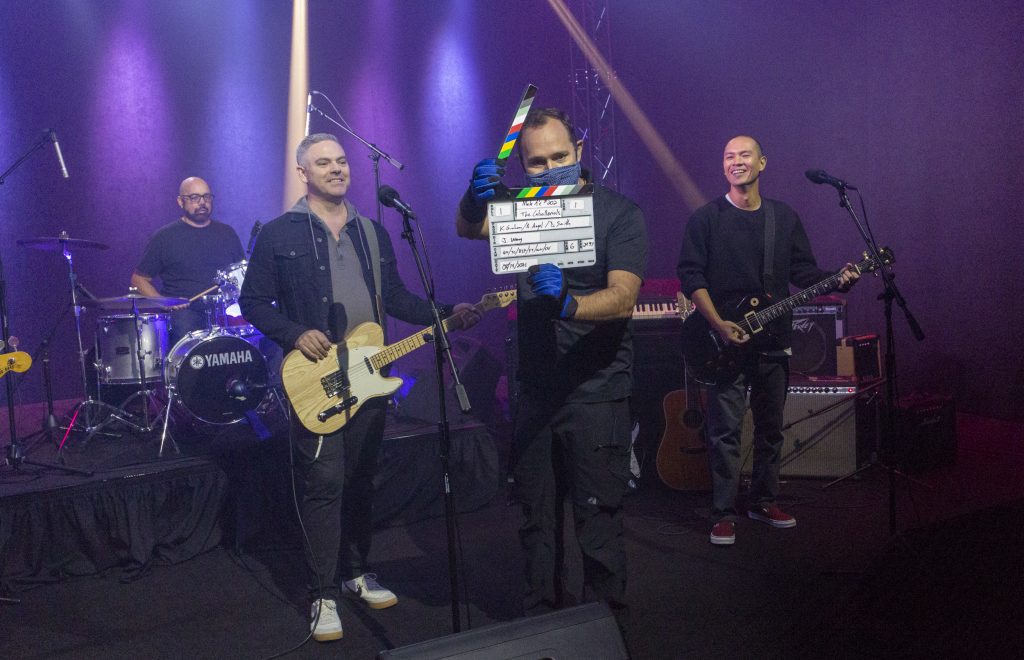 From left to right: Director Jon Wong and audio engineer Joey Green at the wrap of the shoot. Handheld camera operator Alex Miyamoto gets a low angle shot. Floor director Scott Nordquist slates for the Caballerials. 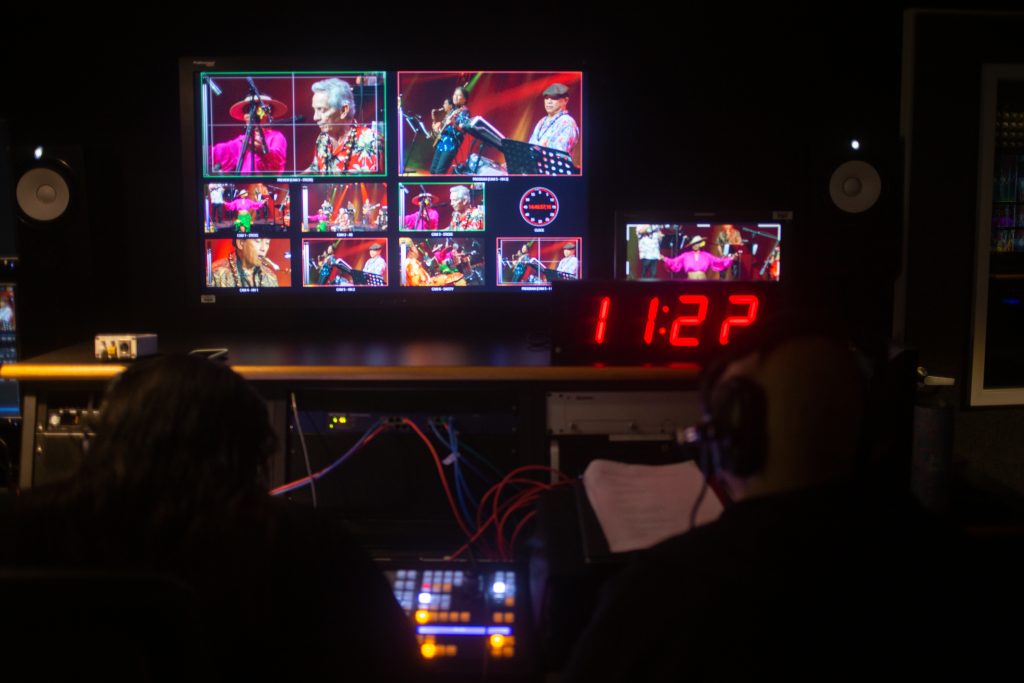 In postproduction, Kekoa, Jon, and the other producers worked closely with Senior Video Editor, Deron Kamisato. Deron used his experience editing Season 1 to develop his own unique “eye” for the show. Chase Yamauchi, our second key editor, also contributed with his brilliant artistic foresight. Kekoa explains, “Working closely in this group dynamic, we were able to develop the entire process into a smooth running machine with very minimal wasted recording time.” 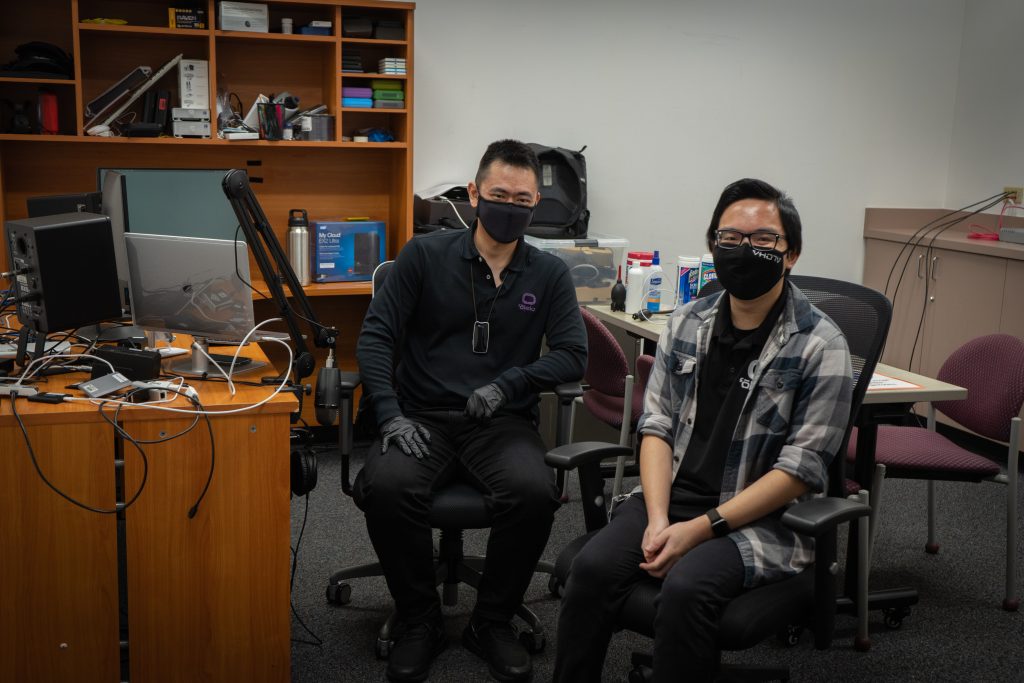 Mele Aʻe is covered with six cameras. Each camera gets ISO recorded by in-camera SD cards, the Tricaster switcher, and externally with KiPro drives. According to Deron, this can average between 750GB to 2TB worth of data.  All the footage gets ingested and organized, then imported into Final Cut Pro as multi-cam clips.

Editors Deron Kamisato and Chase Yamauchi in their Māpunapuna office.

Sprinkling in new graphic elements created by Communications Specialist Dane Neves and scratch tracks from the audio engineer, the show goes through multiple revisions after review from Kekoa and Chief Production Officer Angela Angel. Deron averages around nine to ten rough cuts per show. After the cut is approved, the final sound mix is added and color effects are applied. Lastly, the show is trafficked through our Programming department and uploaded to our YouTube and Facebook pages to premiere simultaneously with the television broadcast.

The biggest editing challenge that Deron and Chase were faced with was the very short turnaround time for Episode 6. In normal circumstances, the team has a week after the shoot to edit and submit the show for air (which they take full advantage of). Because of an irregular month, Episode 6 was due in three days. With extra long hours and a strong support by the rest of the production team, the episode was completed and delivered on time, and garnered significant views online during its premiere. 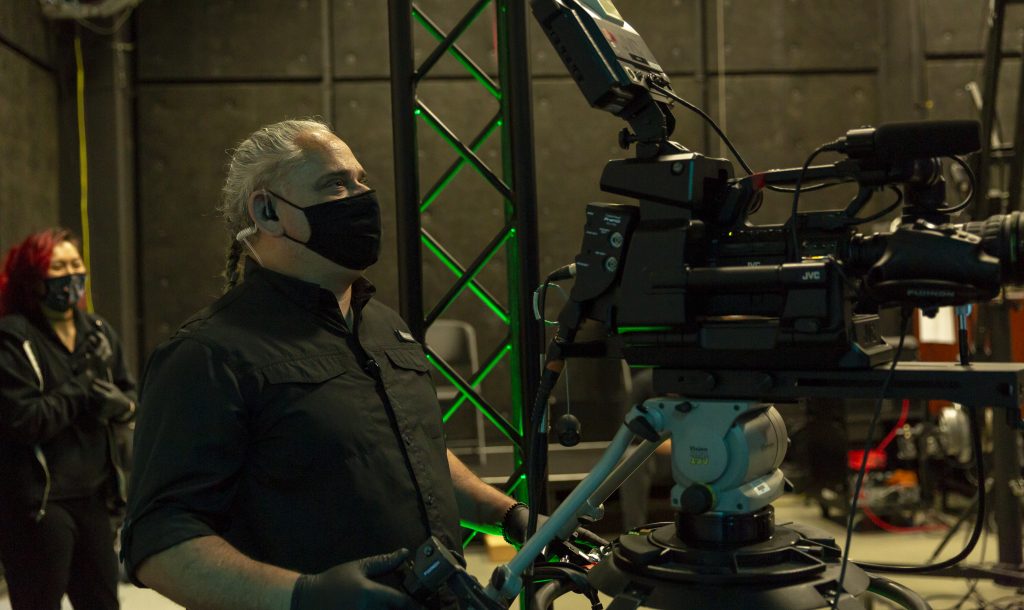 It takes an enormous amount of resources to produce a professional-level show like Mele Aʻe. Kekoa states, “Mele A’e is absolutely on-par (or better than) any of its contemporaries not only here in Hawaiʻi, but across the country.” As a non-profit organization, ʻŌlelo has but a small fraction of the budget spent per episode compared to typical “Hollywood” productions of similar caliber to spread throughout our entire season. But we make it work.

“We are so happy our new CEO, Roger McKeague, sees the value in Mele A’e, and the real benefit it provides to the community.” Kekoa believes that “it is only with Roger’s support, our committed hard-working crew and the outstanding support of our sponsors that we can make this even begin to happen.”

Interested in sending in an audition video for Season 3? Visit olelo.org/auditions for more information.

You can watch the entire series of Mele Aʻe on ʻŌlelo’s YouTube channel below.