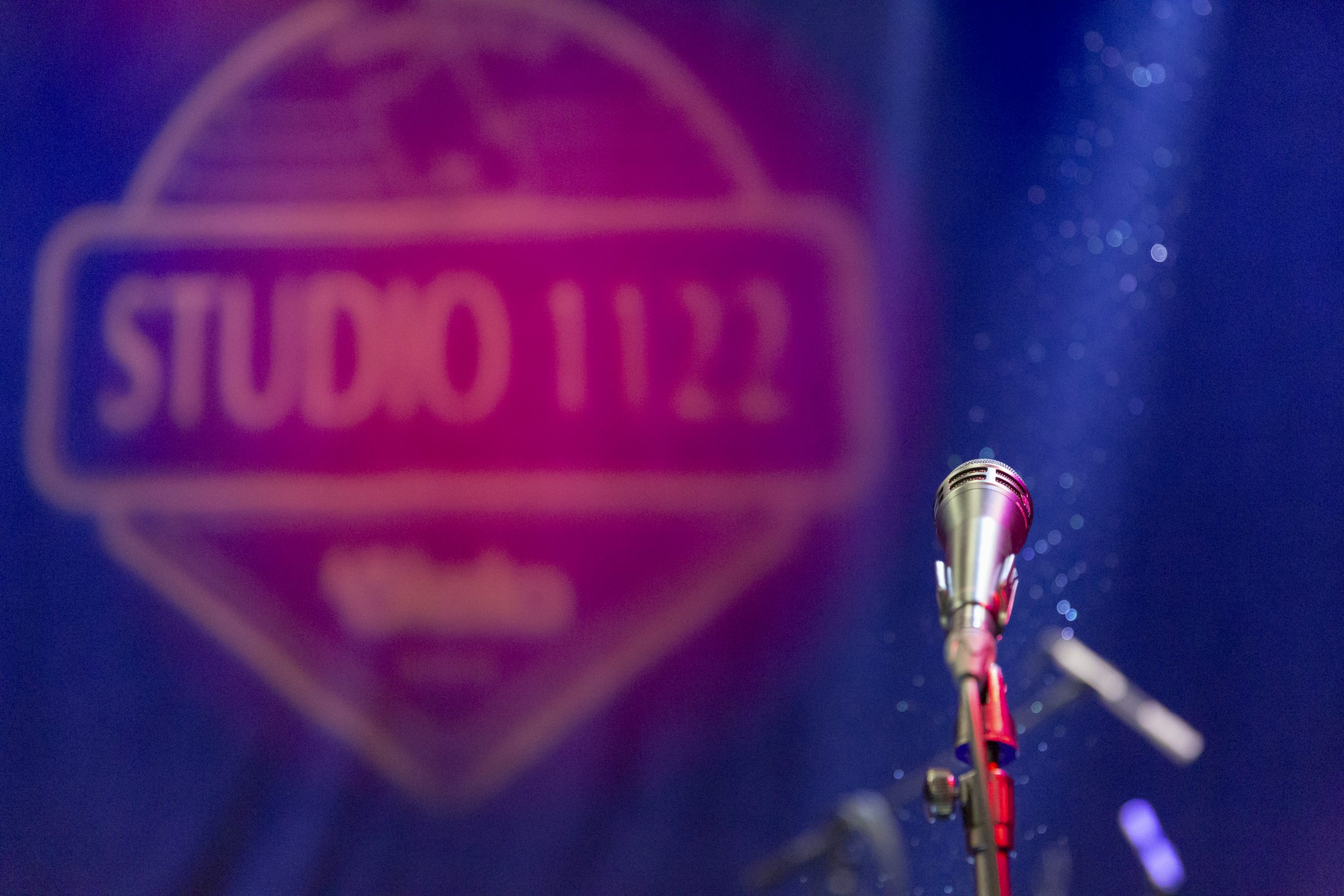 Behind the Scenes of Mele A’e

Mele Aʻe (Raise the Music) is ‘Ōlelo’s new monthly series hosted by ukulele virtuoso and composer Jake Shimabukuro. Mele Aʻe allows aspiring local musical talent to introduce themselves – and their own original compositions – to audiences in Hawai‘i and far beyond.

Mele Aʻe premiered in January and is wrapping up its first season in April. The second season is scheduled to run between July and October of this year. Mele Aʻe can also be seen on ʻŌlelo’s Facebook page and YouTube channel.

The 12 groups or individuals showcased in this inaugural season of Mele Aʻe were selected by an advisory board that includes:

Interested in learning how Mele Aʻe is put together? Join us for a behind-the-scenes tour of our production… 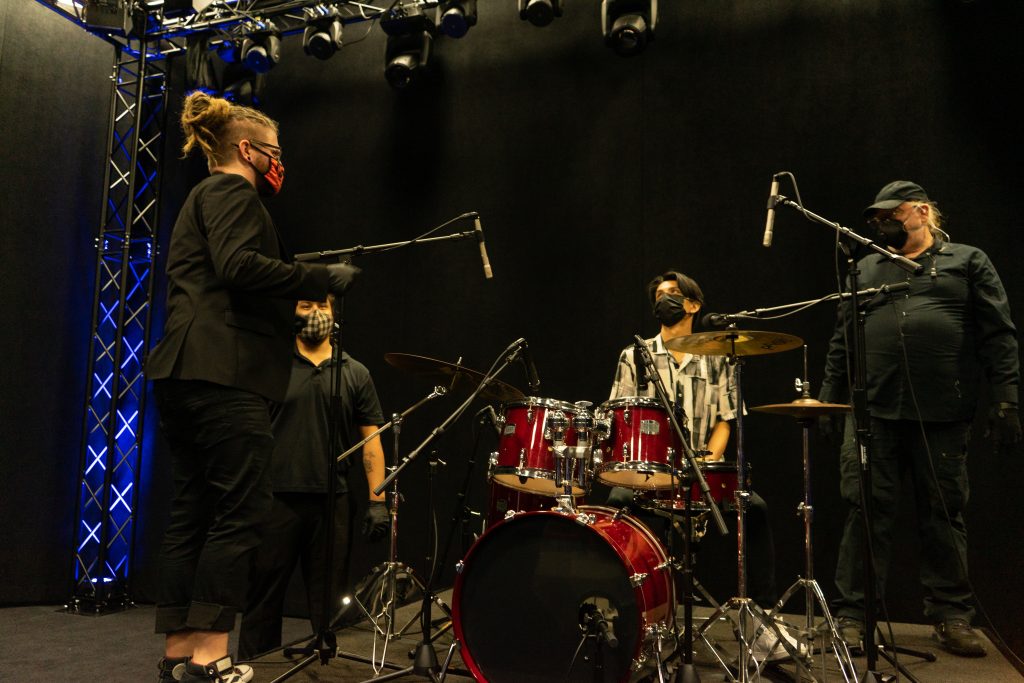 Once a month, a dedicated ʻŌlelo production crew spends a day shooting several musical acts in Studio 1122. Our day begins with crew arriving at the studio in the early morning. With most of the heavy-duty video equipment and lighting cues setup the day prior, our team takes this time to do final tech tests and crew briefings.

Once the first scheduled talent arrives, our audio technicians works with them to get their musical instruments on set, plugged in, and leveled out. Pictured here is Mele Aʻe Advisory Board member and lead audio engineer Donovan Smith (far right) being assisted by sound mixer Lock Lynch and studio monitor engineer David Naylon, setting up Royce Bailey Ariola’s (of Kennedy Taylor and the Electric Pancakes) drum set.

Typically, performers with 3 or more members are up first since their setup takes the longest. Following the band act are musicians with smaller footprints. Pictured here is DNA Muse during an early rehearsal on our very first day of shooting. 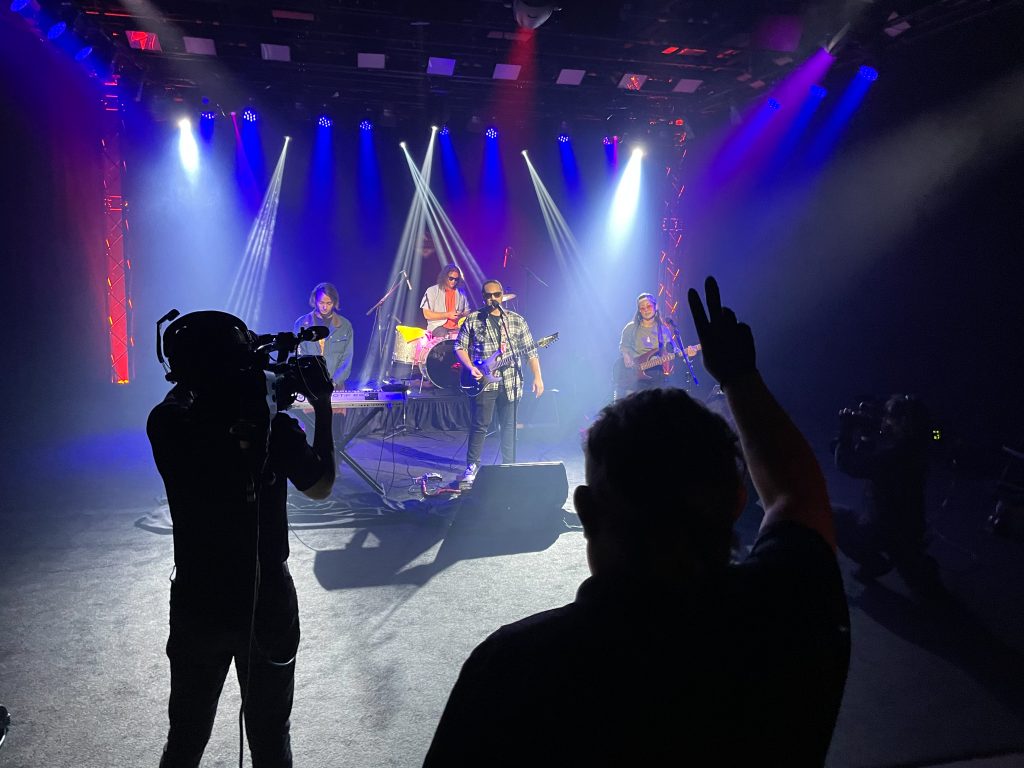 Before the cameras roll, our amazing hair/makeup artist Chris Jose ensures that each talent looks their best. Pictured from left to right: Jenuine Leigh and Fungi Queen’s Ben Robinson. 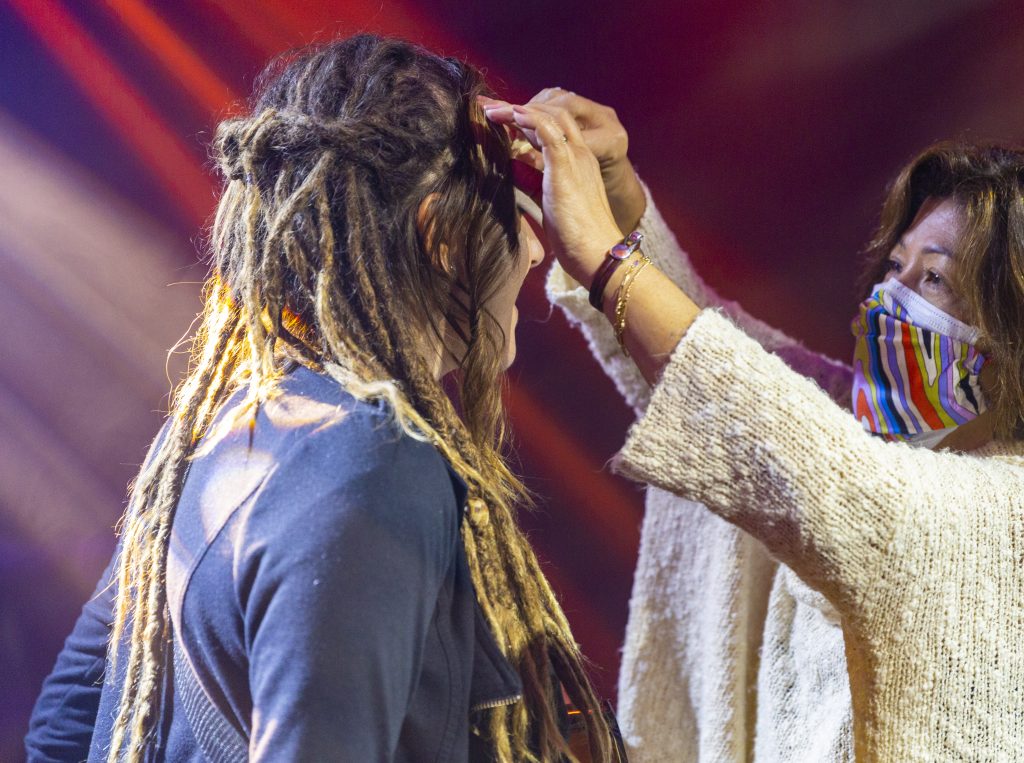 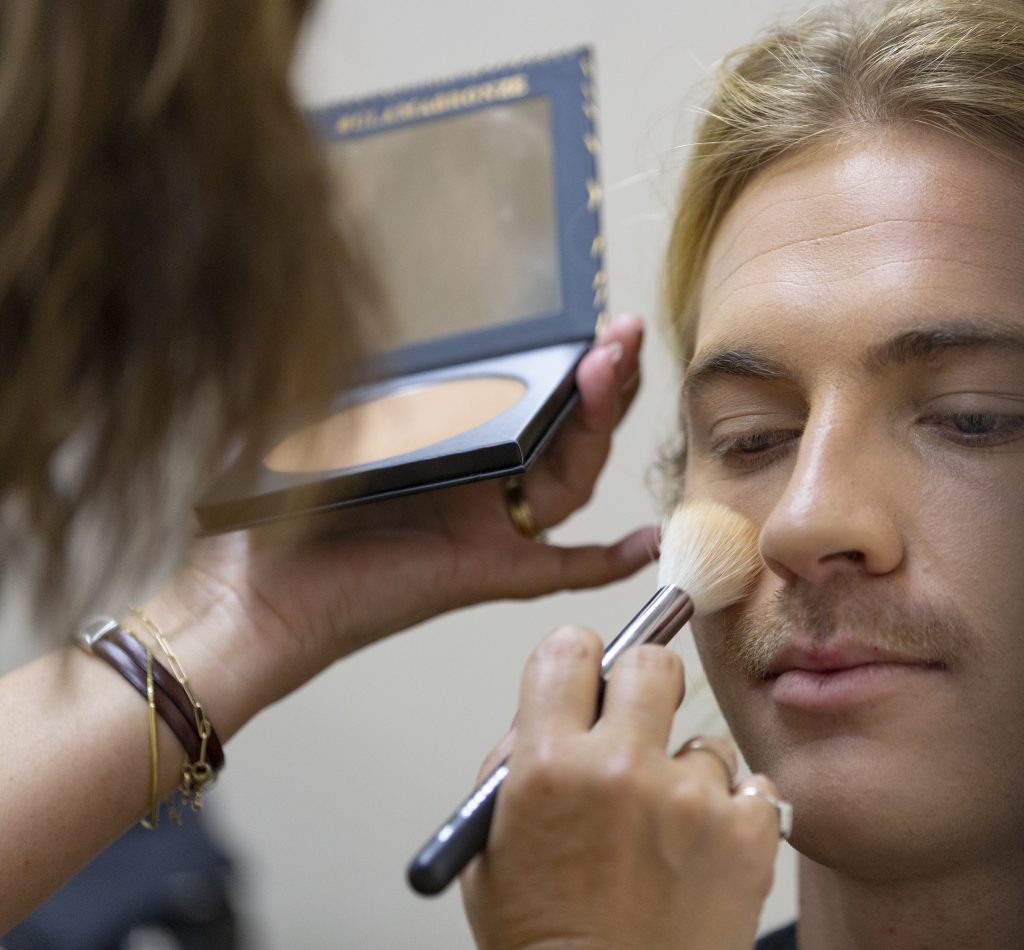 We shoot Mele Aʻe on 6 cameras: two hand-held, three on “sticks” (tripods), and one on a jib (a projecting crane-like arm). Having this many cameras is necessary to capture every single detail of any given performance, especially for artists with multiple members and instruments. Pictured below is handheld camera operator Wayne Yun getting a low angle of performer Ashton Nicolas. Justin Kuwamura checks the settings on another handheld camera. 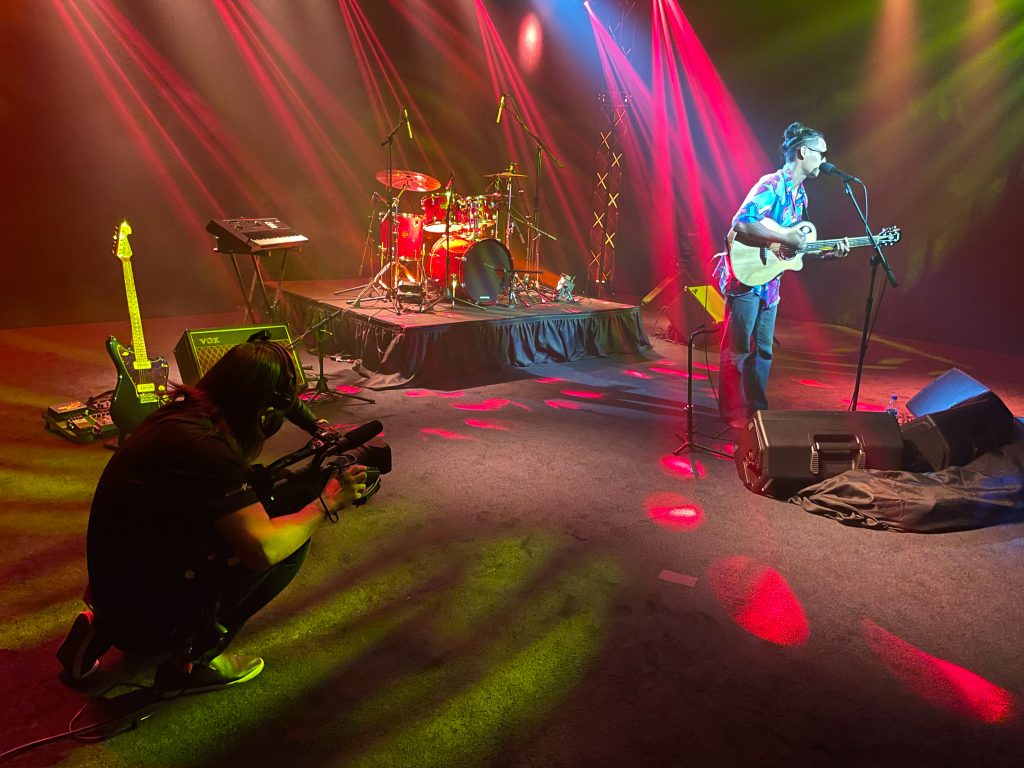 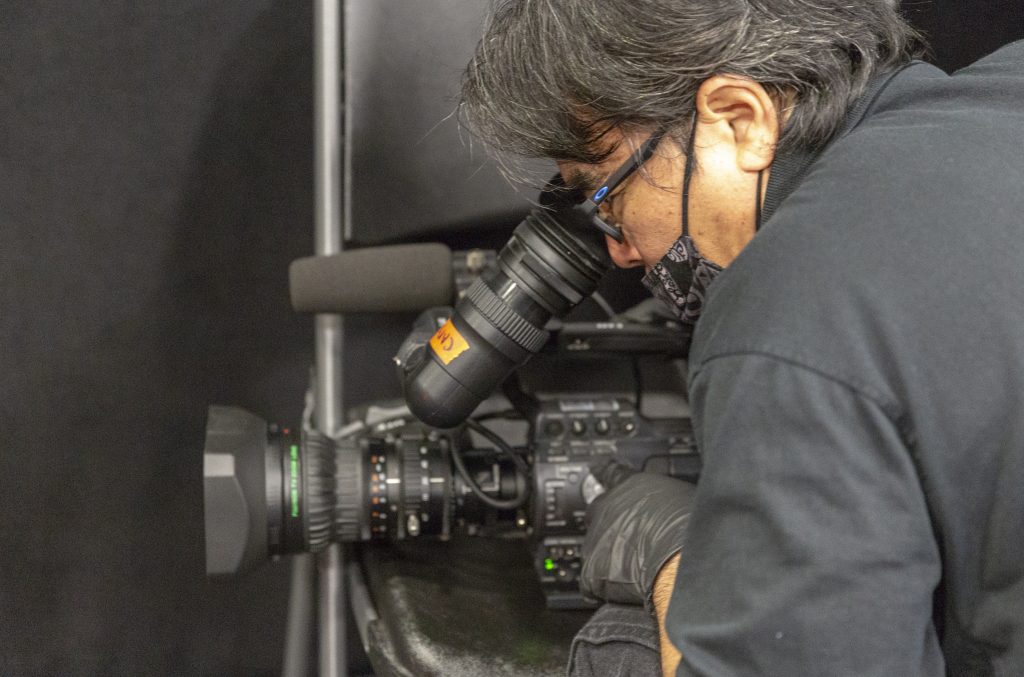 A view from our certified lighting board operator’s seat as Kalani Puana jams out. 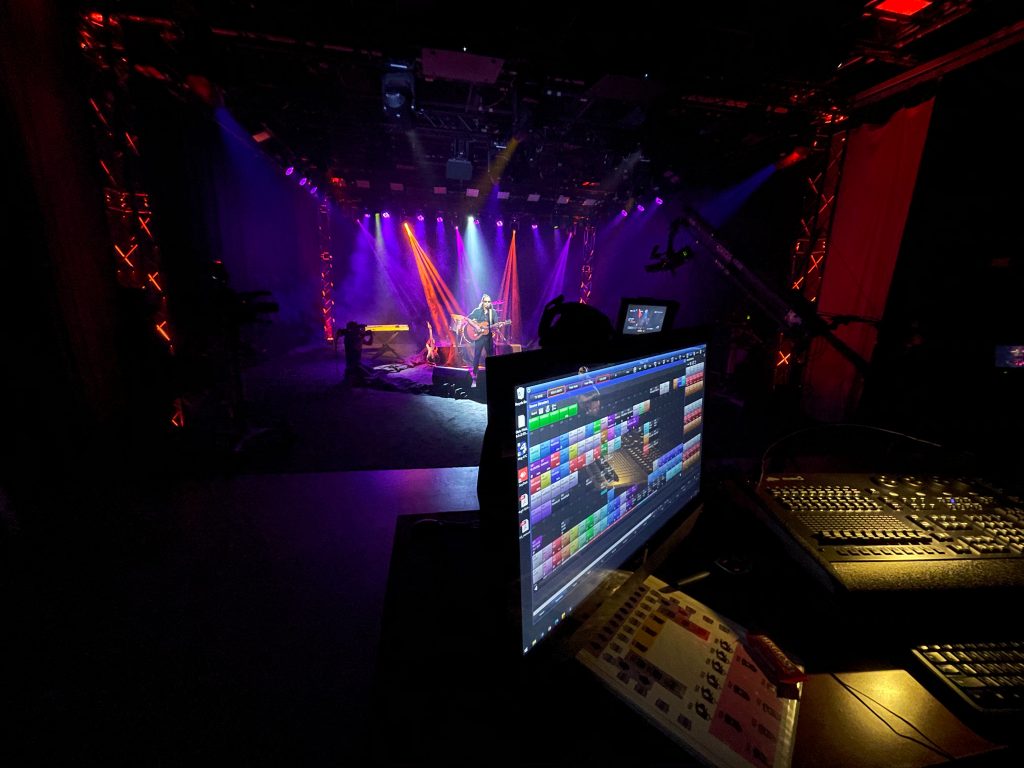 From the opposite view (left to right) is jib operator Thomas Collins, studio monitor engineer David Naylon, and lighting board operator Sisto Domingo. 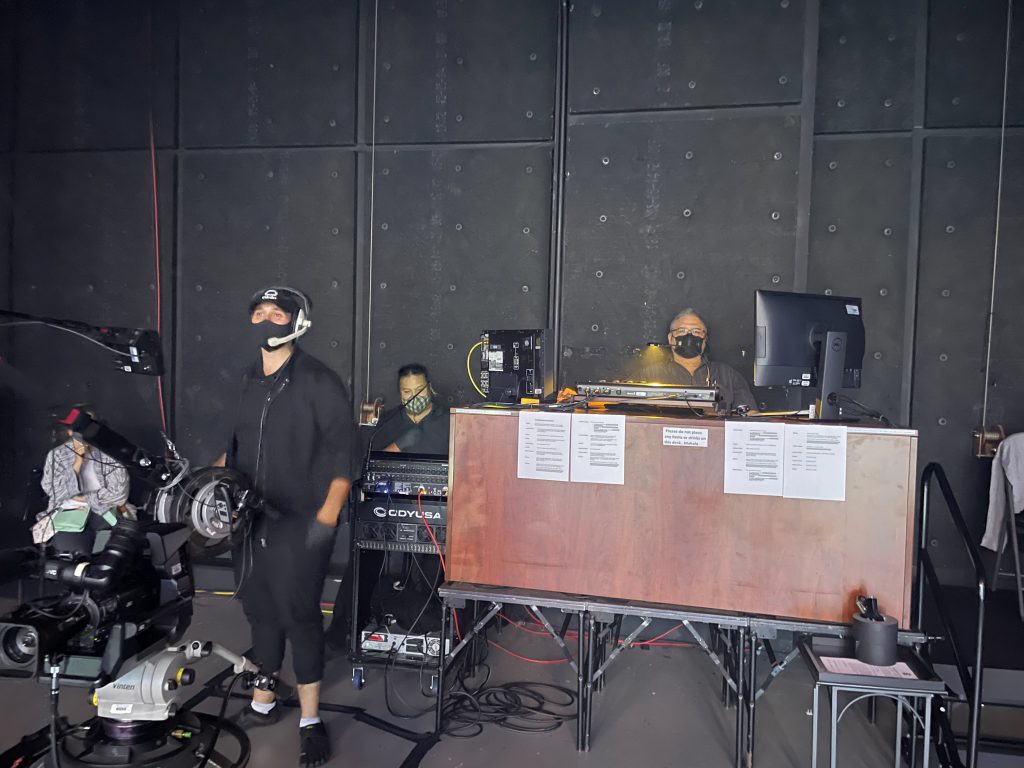 Here is a view inside our control room. Justin Kuwamura keeps an eye on the brightness of each of our 6 cameras and “shades” them when necessary and switcher Angela Angel utilizes our Tricaster to switch between recorded camera angles. 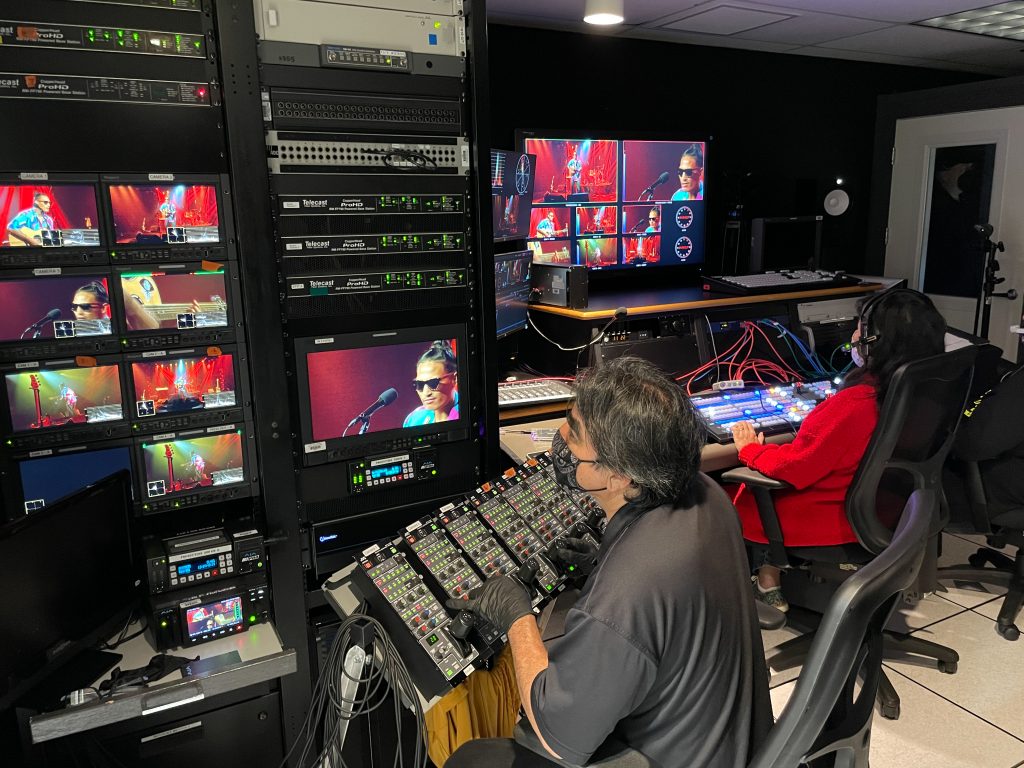 After recording several takes of each performing act, our host Jake Shimabukuro has a conversation with the talent, delving into their background, their inspirations, and where they see themselves in the future. Pictured below is Jake on set with Jenuine Leigh and Kennedy Taylor and the Electric Pancakes’ guitarist Sebastian Longorio. 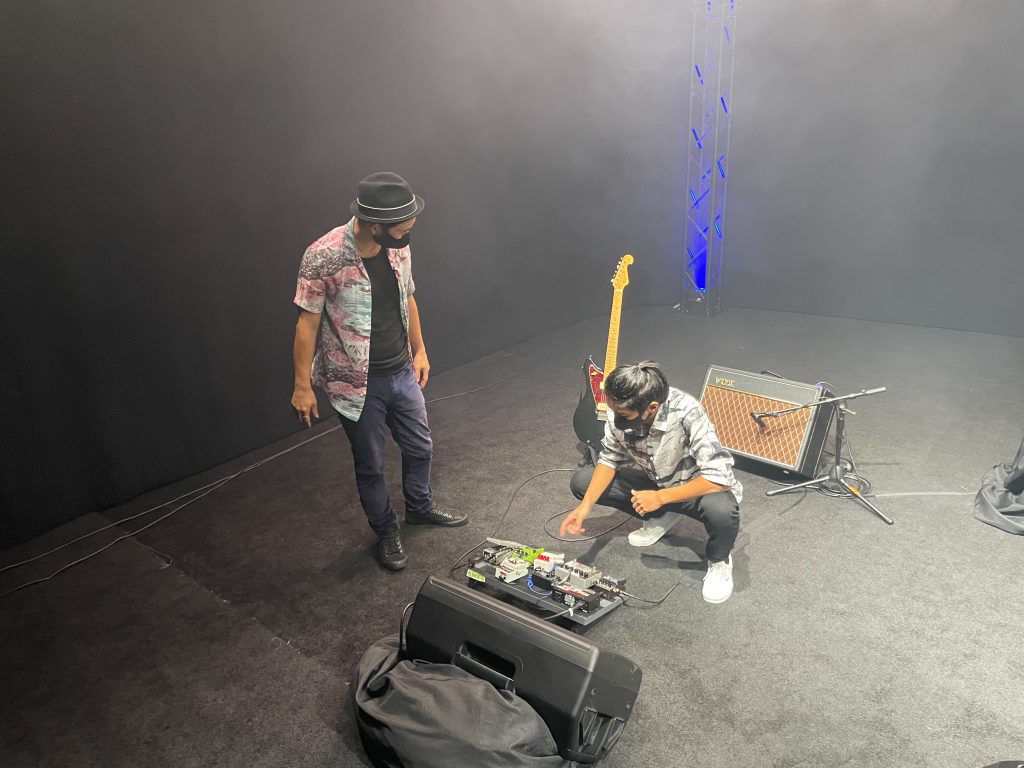 At the end of the shoot day, Jake Shimabukuro treats us all by performing one of his original ukulele compositions which is included at the close of each episode. Pictured below, Jake rocks it out and stage manager Scott Nordquist holds up a clapboard or “slate” to visually communicate camera-specific information to the editor. 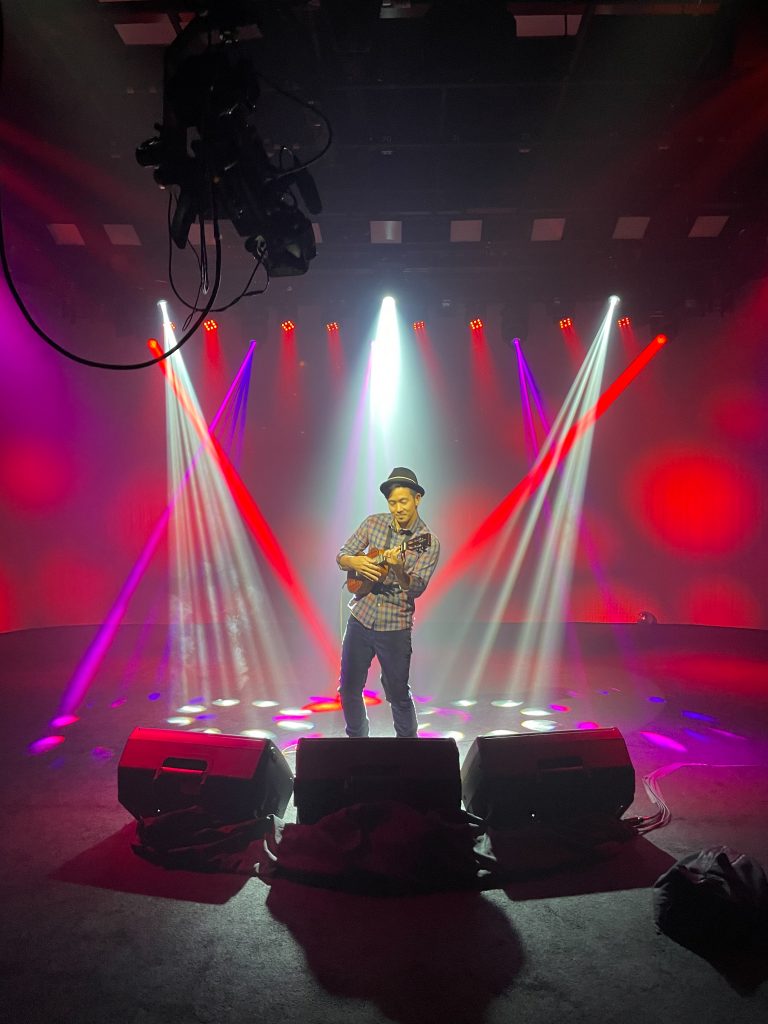 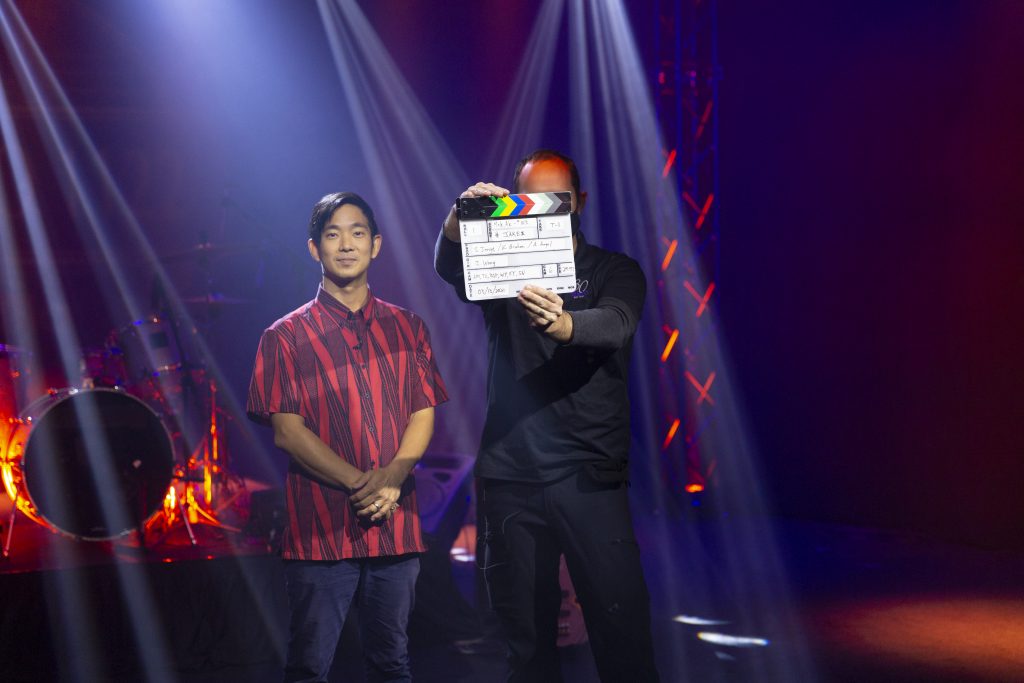 But wait…there’s more! After the recording, the footage is delivered to our Senior Video Editor Deron Kamisato, who assembles a broadcast-ready version of the show. Throughout the edit, Deron works closely with audio engineer Donovan Smith to ensure that the audio recorded on the shoot day is mastered and synced with the appropriate video footage. 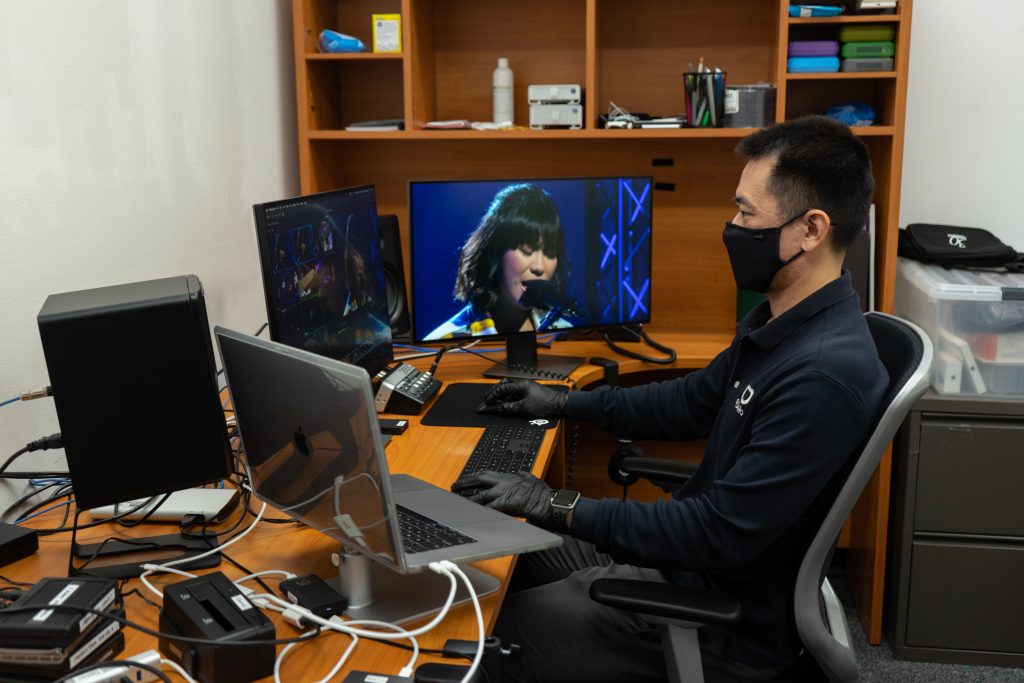 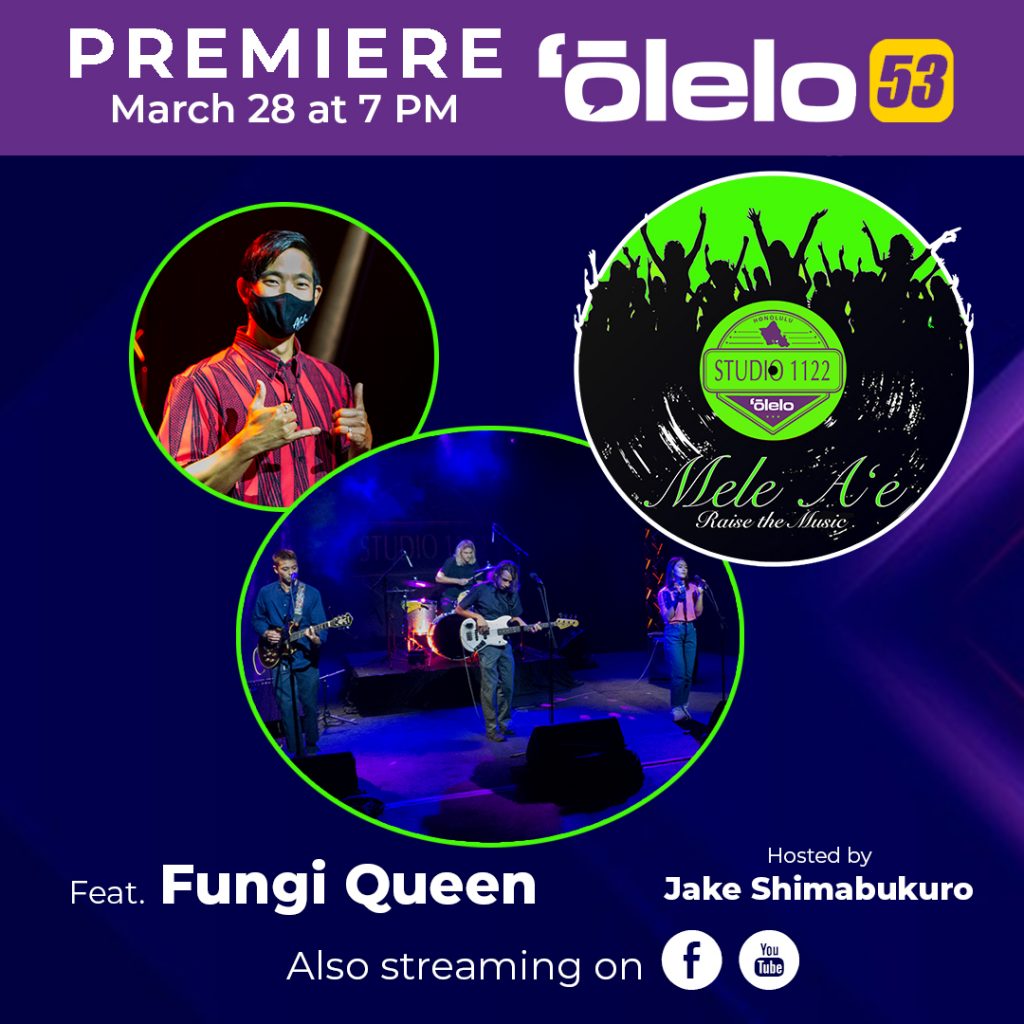 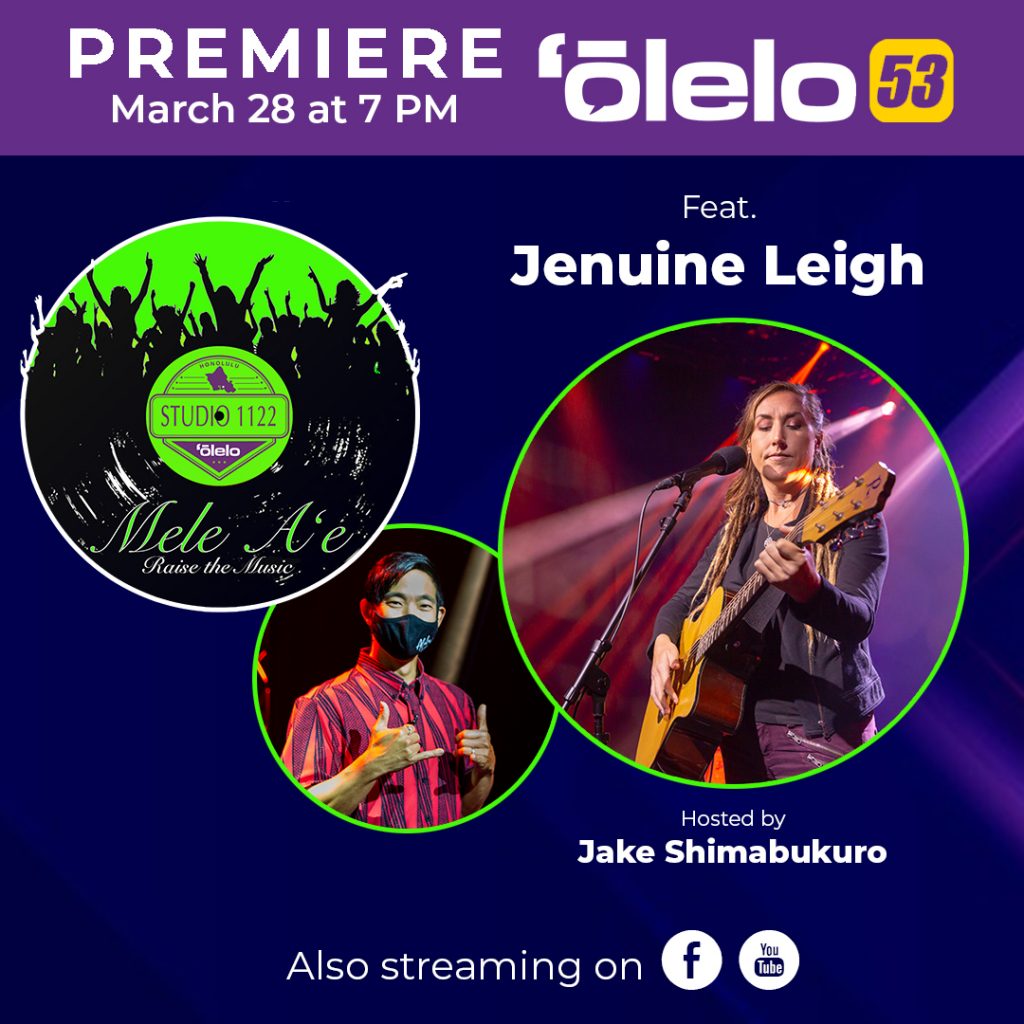 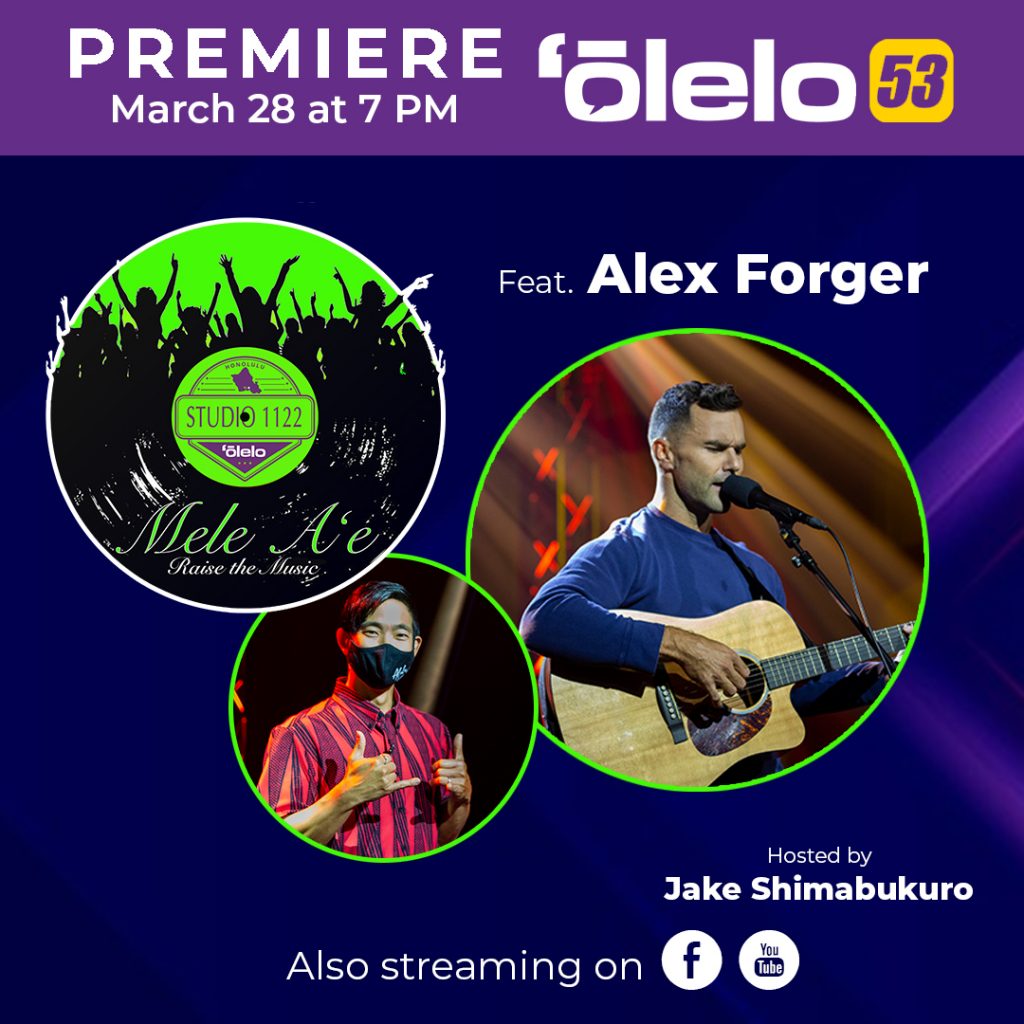 It takes a small army to put a show like Mele Aʻe together and ʻŌlelo does it with teamwork and Aloha. You can watch all episodes of Mele Aʻe here:

Think you have what it takes to be a Mele A‘e star? Visit olelo.org/auditions for more information.

One thought on “Behind the Scenes of Mele A’e”