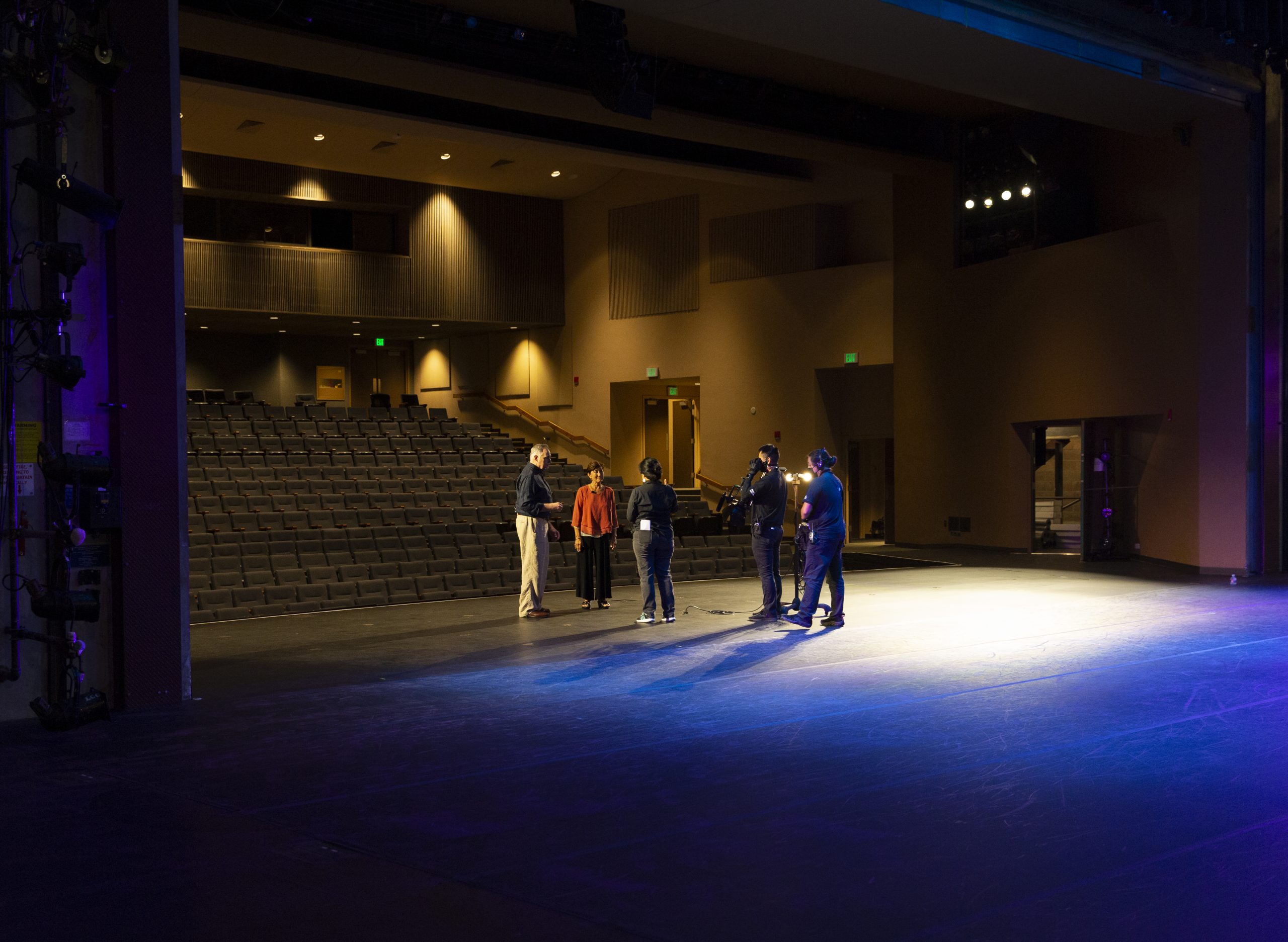 Since 2017, Island Focus, ‘Ōlelo Community Mediaʻs monthly half-hour signature series, has featured exclusive interviews with leaders of our government, business, education, and community sectors to talk about their passions, what’s new, and what impact they’ve made in the community. Part of this series’ charm is that each episode was shot on-location at one of Oʻahu’s many notable locales including the Bishop Museum, Pearl Harbor, Aloha Stadium, the Waikīkī Shell, and the Japanese Cultural Center of Hawaiʻi.

When the pandemic hit, all Island Focus on-location productions were halted, forcing the show to transition to a virtual format. “Can we really STILL do this?” Show host Lyla Berg was “impressed with the creativity, resilience, and dedicated energy of the crew to continue producing first-class quality shows – despite personal angst, professional uncertainty, and new health regulations within the industry.”

However, not much changed inherently for the production team. Each episode, recorded in our Studio 1122 control room, was pre-produced weeks in advance, tested and re-tested prior to the taping. “The main difference for us was logistic, with a shift from in-person setups to making the best of technology and remote setups,” Production Services Manager Kekoa Graham reflects. “But the actual fundamentals that govern any production still stood, just with more PPE and social distancing added to the mix.”

Media Services Associate Alex Miyamoto directs host Lyla Berg and a guest on framing up their virtual shots in the studio control room. 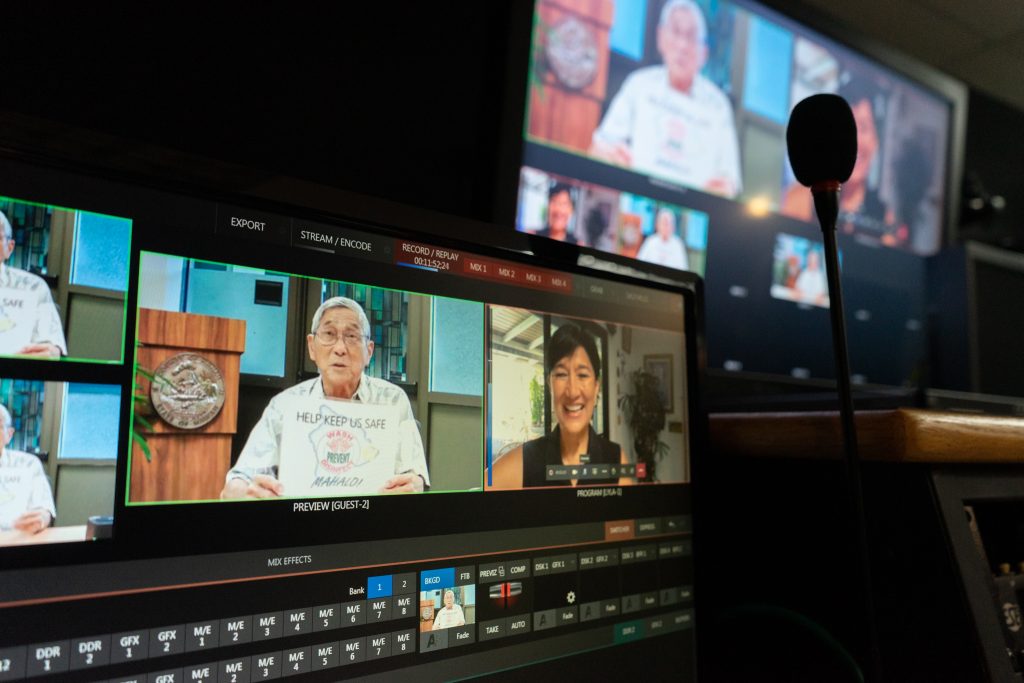 Our crew quickly began to realize technical headaches that came with the rapid adoption of videoconferencing tools like Microsoft Teams and Zoom. This included shoddy signal connectivity, unexpected power outages, and lack of hardware available to the guests, who were being interviewed in their homes or their offices. However, without the WOW factor of the locales, ʻŌlelo’s Chief Production Officer Angela Angel saw this as an opportunity to engage with guests in ways beyond the usual scope.  “What was great about going virtual was that no matter who we asked, they were usually available to make it; no travel time,” Angela states. “We were also able to capture folks from the neighbor islands and even one person on the mainland.”

Lyla Berg, from her home in Honolulu, and Hawaiʻi County Mayor Harry Kim, from his office in Hilo, come together in the studio control room.

The virtual aspect of the show also gave Jo-Lynn Domingo, ʻŌlelo’s Production Coordinator, flexibility in organizing everything. Jo-Lynn’s responsibilities include reaching out to and scheduling all of the guests as well as managing location permits and staff accommodations. One particular episode featured interviews with the mayors of all 4 counties of Hawaiʻi, which was scheduled for and recorded over a two-day period. Such a feat would not be possible had this been a location shoot requiring the guests to physically be present on site during the course of a day.

Alas, the virtual format would not have benefited Island Focus in the long run. As the City and County of Honolulu and the State of Hawaiʻi eased lockdown restrictions to the point where it was safe to shoot on location once again, the production team regrouped and set out to bring Island Focus back to form. 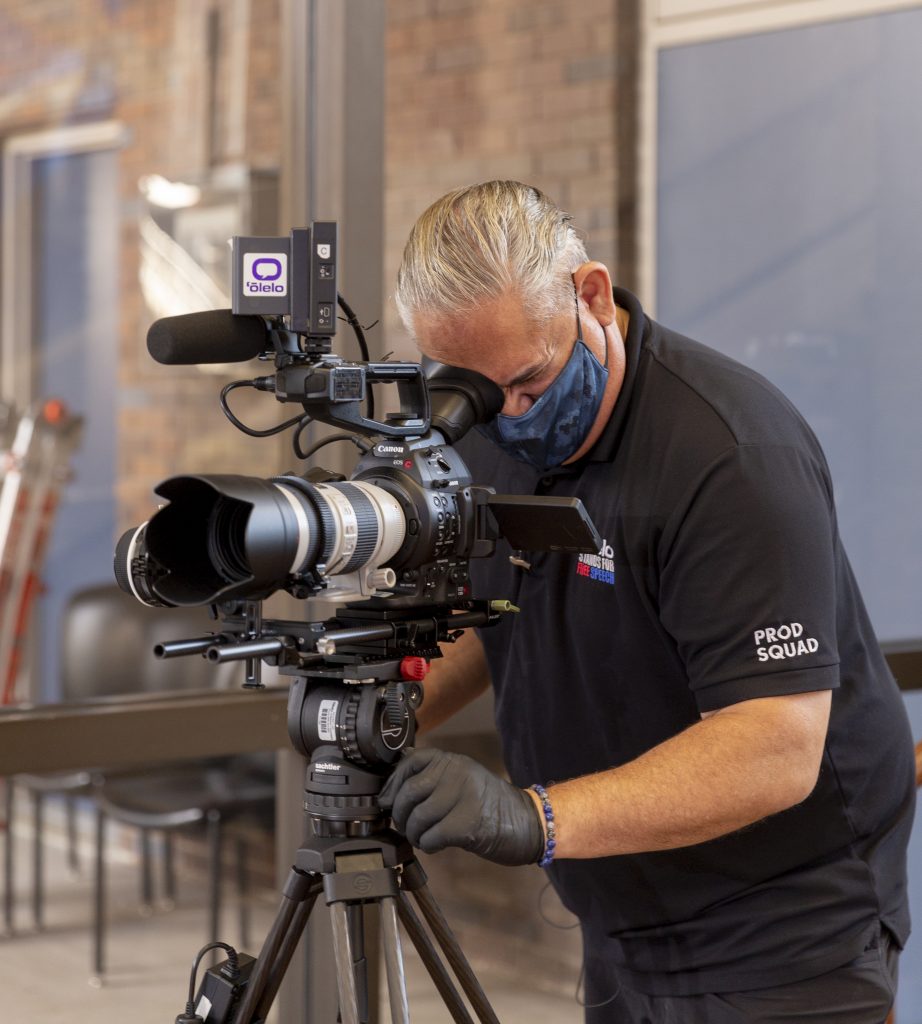 The first shoot back on location was on the campus of Leeward Community College in June of 2021. Naturally, there were still some concerns from the crew about COVID spread. Angela Angel affirms, “Safety is always priority 1 and the crew take extreme measures to keep each other and guests safe.”

For Lyla, the biggest challenge being back on location was adhering to the taping time schedule. After a year of separation, “all of us on the crew wanted to reconnect with one another, chat eye-to-eye, and catch up on the last year of no hugs or interpersonal conversation! With everyone fully vaccinated, including the guests, there was a little more ‘calm’ to be in closer proximity with one another.”

So how will Island Focus be different going forward?

For starters, guests get to speak for a longer period of time. Previously, each episode, clocking in at 30-minutes, featured up to 5 guests who were given only a 5-minute conversation with Lyla. Now, each episode features 3 guests that fit into a clearly defined theme as dictated by the location of the month. From the footage captured at each location, 2 episodes will be produced. The episodes will also include “walk-and-talk” segments where a representative of the featured location takes a stroll through the facilities with Lyla, shedding light on the site’s history.

With two cameras locked down on tripods and one camera on a remote-controlled slider, the production crew performs their final video and audio tests before the first guest arrives.

As Lyla Berg reflects, “While the vision and mission of Island Focus remain consistent, the new format now enables us to expand the initial objectives AND provide a truly contemporary service to the viewing audience.”

“In the end, we are mindful and humbled in how lucky we were to all keep our jobs during 2020,” as stated by Kekoa Graham, “and we are all eager to get back to a safe place where we can continue to provide quality content and ‘make pretty pictures’.”

80+ episodes deep and still going strong, Island Focus continues to capture the stories of our community leaders. Island Focus premieres on ‘Ōlelo Channel 53, first and third Wednesday of every month at 6:30pm, and Sundays at 4:30pm. You can also find Island Focus on ‘Ōlelo VOD Channel 52, ‘ŌleloNet and YouTube. 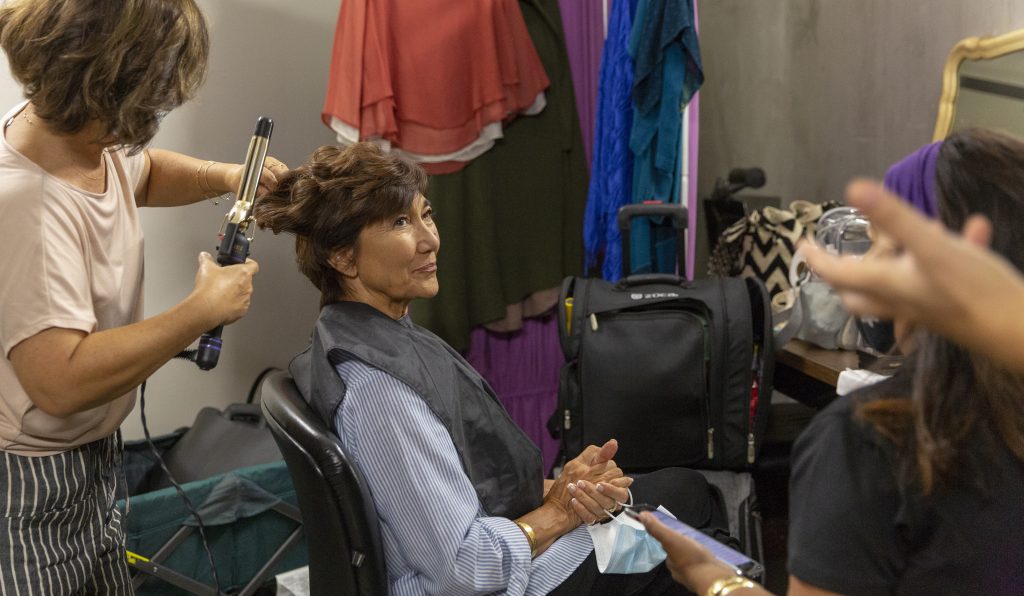 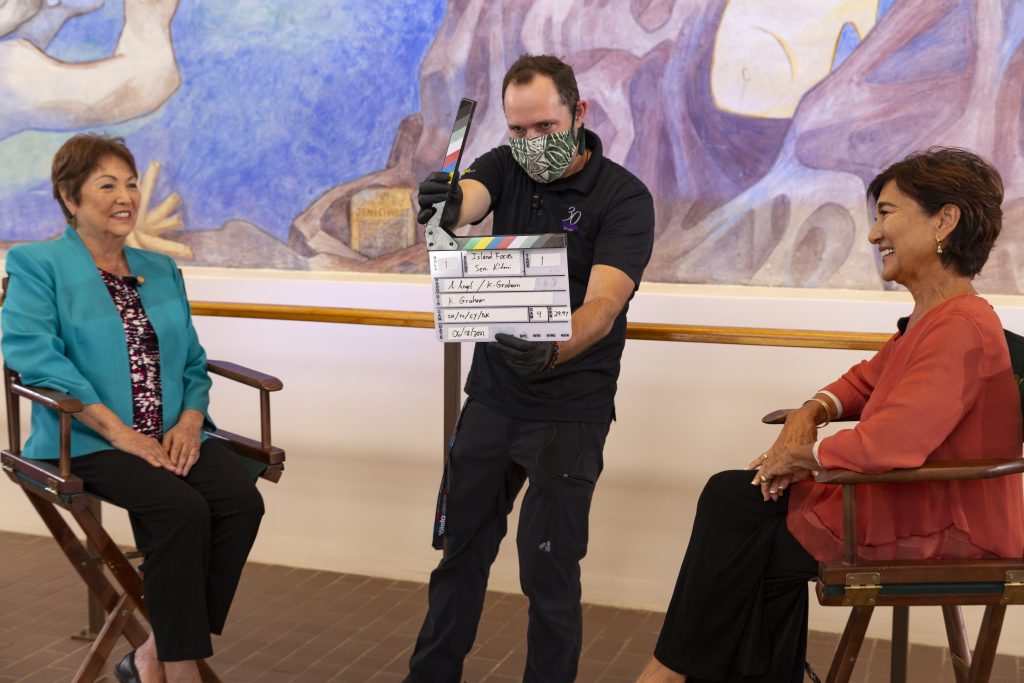