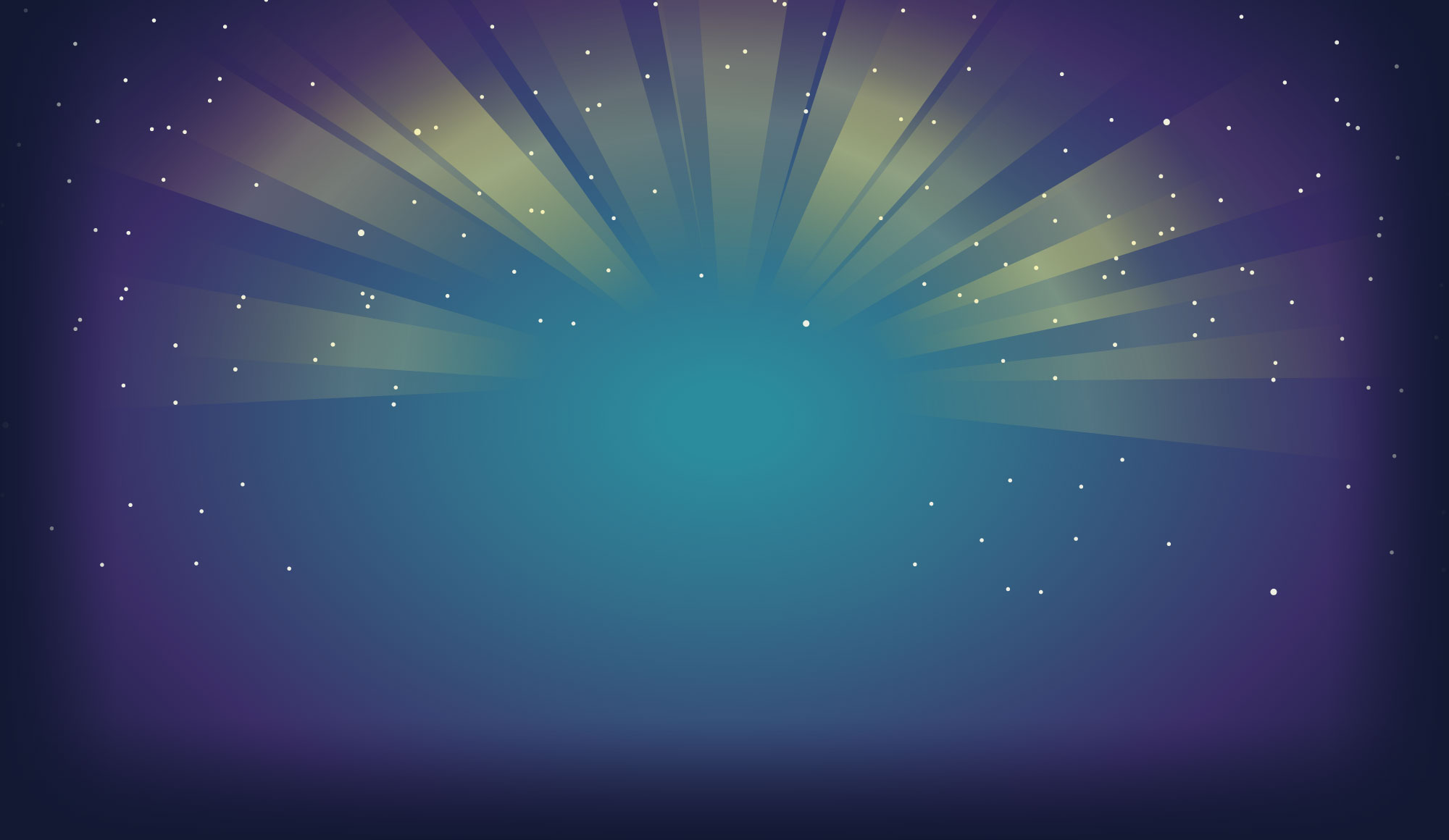 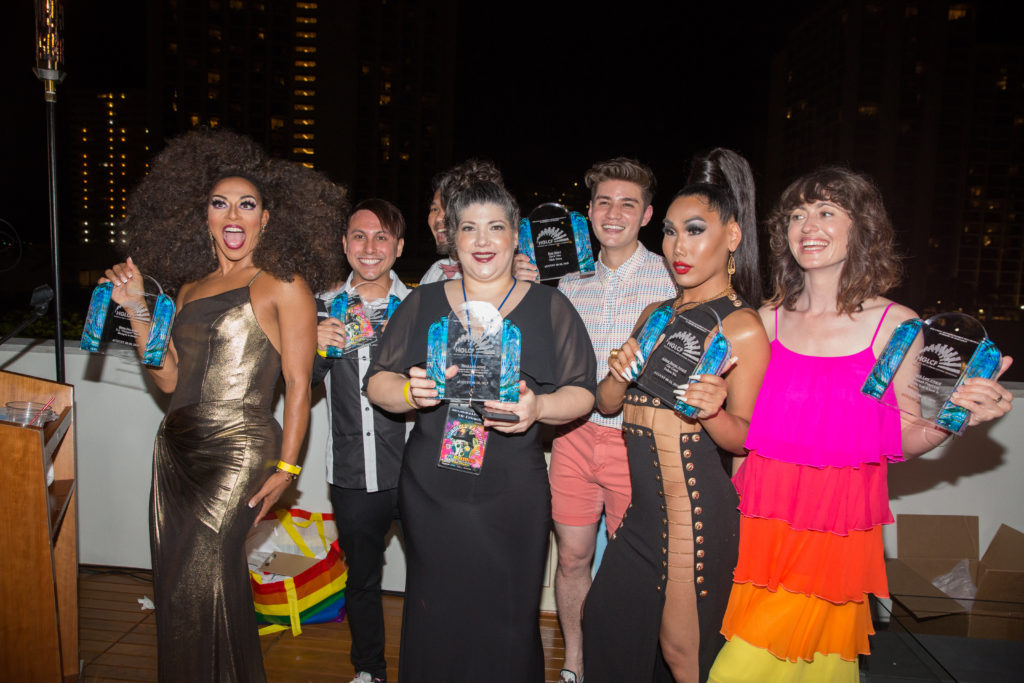 y Livingston and Communications Specialist Dane Neves.  The film festival is one of the longest-running and most respected LGBTQ film festivals in the country, celebrating its 30th anniversary in 2019.  Both Sandy and Dane won the coveted Phred Love Award, a prize given to local filmmakers.  We sat down with Sandy and Dane to discuss the making of their projects.

Sandy’s film, Dungeons & Drag Queens: The Quest for the Golden Wig of Enlightenment, brought together the talents of Honolulu’s premier drag queens and trans actors and tells the story of Rees and her faithful companions as they journey to reclaim her kingdom’s family jewels.

Q: Why did you decide to make this film?

A: I decided to make this film because of the people I’ve met. I work with drag queens, and their talent is often relegated to the clubs or for added color for fundraisers and charity events. So, I decided to find out if any queens were interested in trying something new, making TV and film. I found an incredible group of queens who are mostly up for anything and love to have fun. So, I made this film for them, to honor their talent.

As far as genre is concerned, I lean toward scifi and fantasy because I love world-building. I want to create my own worlds with my own rules, and I do that with my films. In this film, I created Zemoloc a place where queens rule and there’s always a reason to laugh.

Q: What are your goals for this film in the future? 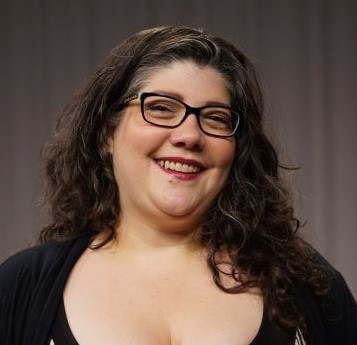 A: First and foremost, I want the queens who star in this film to be celebrated. The Honolulu Rainbow Film Festival did a wonderful job with this. I was so proud to see the queens at the premiere and for them to be surrounded by so much positive audience response. I also want to demonstrate the very real truth “if you can dream it, you can do it”. Two years ago, before coming to ‘Ōlelo, I’d never even picked up a camera. Now, I’m an award-winning filmmaker because ‘Ōlelo believed in me.

This film is the first installment of the Candi Lands Trilogy. The sequel is in preproduction now. It’s titled Battle of Heart’s End and will premiere next year (2020).

Q: What were some of the challenges while making this film?

A: Scheduling was the greatest obstacle for filming. We had a volunteer crew of approximately 20 people with a cast of 14. All volunteered so we tackled this with planning. We set up filming dates far enough in advance to give everyone the time to organize work and volunteer priorities. We also organized fun nights to hang out for the crew so they had the opportunity to get to know one another outside the stressful environment of the set in order to foster camaraderie. These relationships fostered our investment in the project as we grew together.

Sound was the greatest obstacle in post-production. I took a gamble on someone to do sound editing who had never done it before. Bless his heart, he tried; but he failed. I was fortunate that a fellow volunteer producer, Kimo Makahilahila, offered to fix the sound for the project. It took him a couple of months, but he did as much as he could to save the project. Thank you, Kimo!

Q: What advice do you have for an ‘Ōlelo producer interested in making a film like this?

A: Steadfastness. As producers working with volunteers, we deal with many more scheduling/availability issues than when working with typical paid employees. Patience. We also deal with extraneous issues (i.e. personality conflicts, creative disagreements, etc…) when organizing a group of volunteers to create our vision. In both areas, focus on the goal is imperative. Hard deadlines, particularly submission deadlines, are great motivators to maintain that focus in order to remain steadfast and patient. Communication. Accountability to your crew helps maintain focus on the long-term goal. Updating your crew and cast on progress throughout pre-production, filming, and post-production really hones in the feeling of accountability. 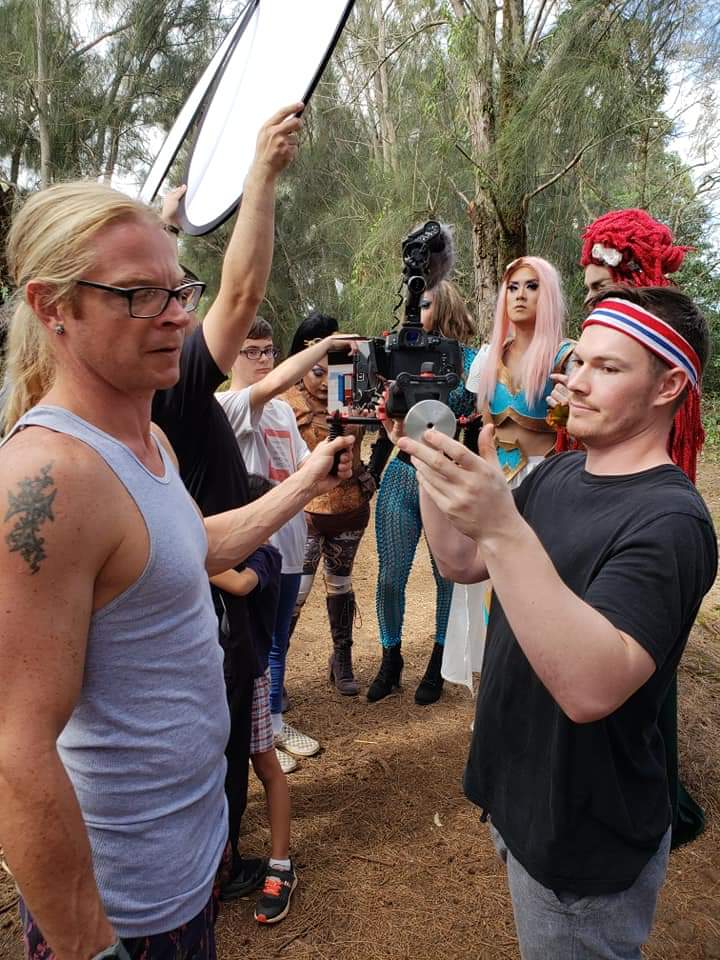 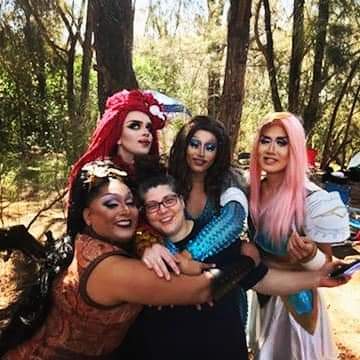 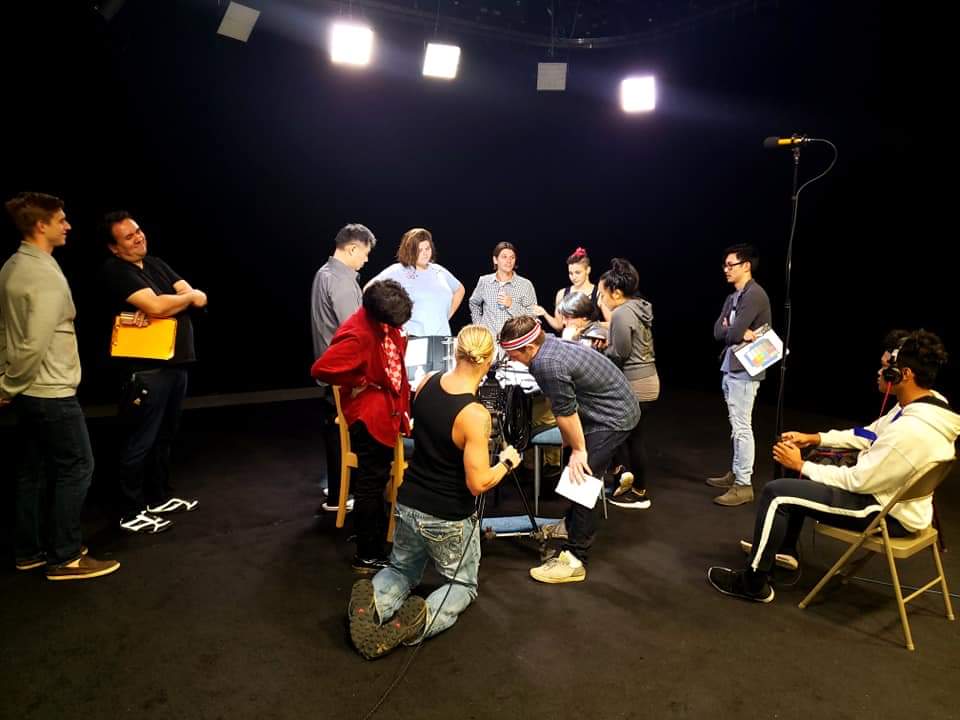 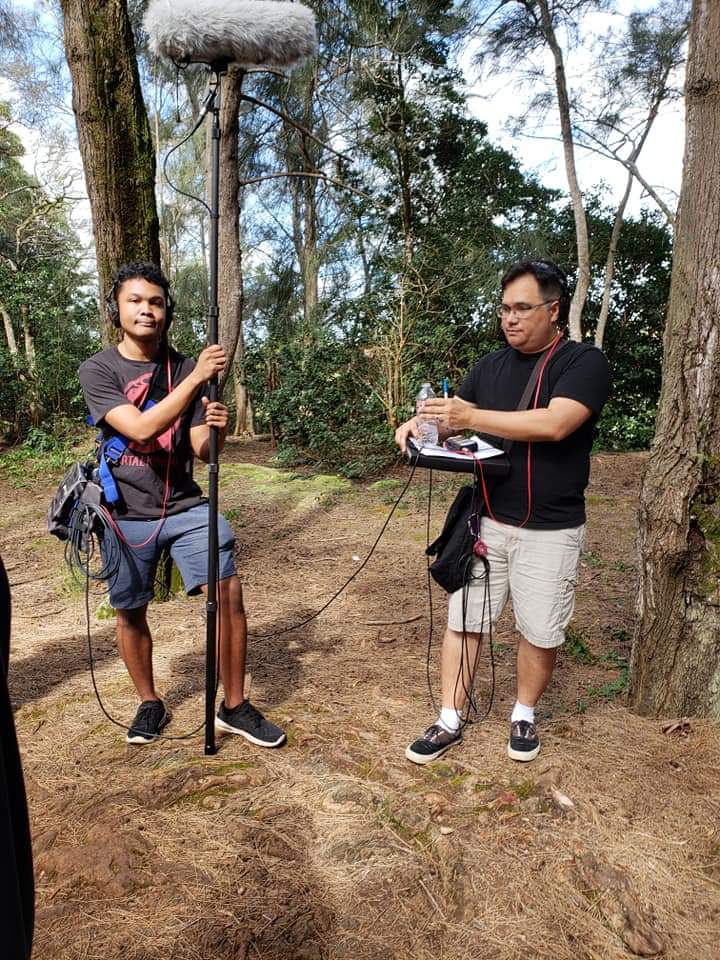 Dane’s film, Outside the Lines: The Art of Cheyne Gallarde, explores the world of Hawai‘i-based visual artist Cheyne Gallarde from his humble beginnings as a photographer to his rise to fame as an illustrator of renowned drag queens and LGBTQ leaders.

Q: Why did you decide to make this film?

A: I’ve been friends with Cheyne for almost 10 years now and we’ve worked on a couple creative projects together in the past.  This is really just a fan film because I truly admire his artistic integrity and drive.  It’s a great feeling to see your artist friends’ work be celebrated by people around the world.  What a privilege it was to be able to tell his story through film. 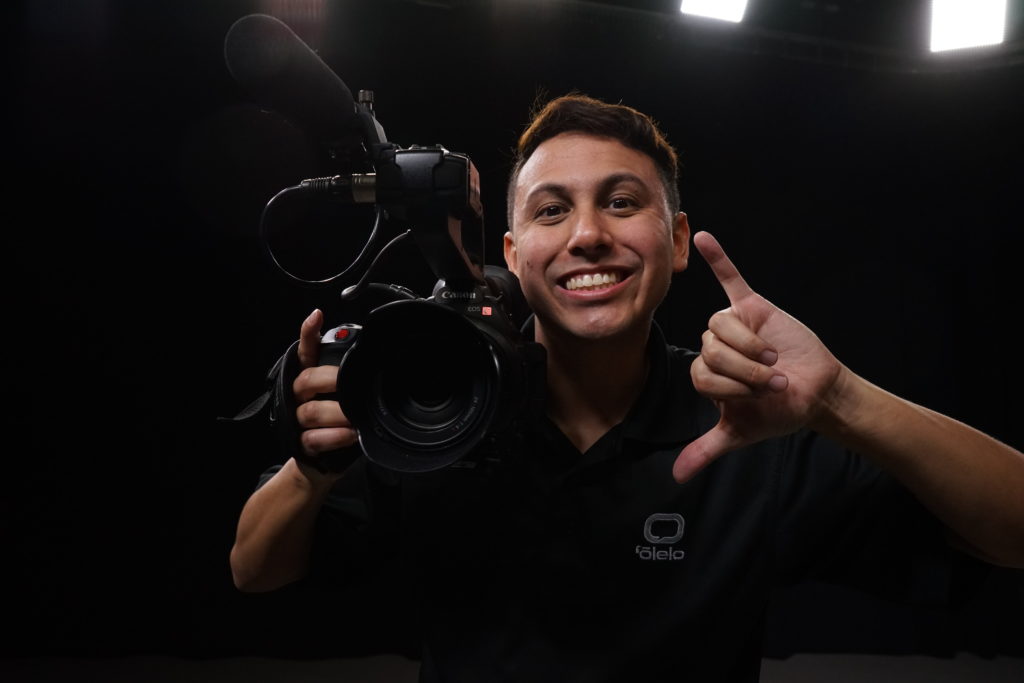 Q: What are your goals for this film in the future?

A: The goal with any of my films is to get as many people to see it as possible.  Thankfully, the community has a invaluable resource with ‘Ōlelo, offering filmmakers like myself a venue to get our projects out there to the masses at no cost.  Now that it has aired on ‘Ōlelo and has won a film festival award, I feel pleased knowing that local audiences got to see it first.  The film is now available for the rest of the world to view on YouTube.

Q: What were some of the challenges while making this film?

A: This film was shot in September 2018 with editing being completed in December 2018.  Since then, Cheyne has gone on to work on so many cool projects that I wish we got to explore in the film.  So, the biggest challenge with this film was maintaining relevancy.  However, the core message that the film speaks out on is timeless.

Q: What advice do you have for an ‘Ōlelo producer interested in making a film like this?

A: ‘Ōlelo is truly a blessing for filmmakers.  Not only do we get access to innovative media at no cost (just training/certification fees), but we have the opportunity to air our projects on television.  There’s something romantic about being on TV that you can’t replicate from online-based streaming services like YouTube.  My advice to other ‘Ōlelo producers is to take full advantage of what ‘Ōlelo has to offer.  Take every class you can, utilize every piece of equipment you can.  The more you use it, the more confident you’ll be as a filmmaker.