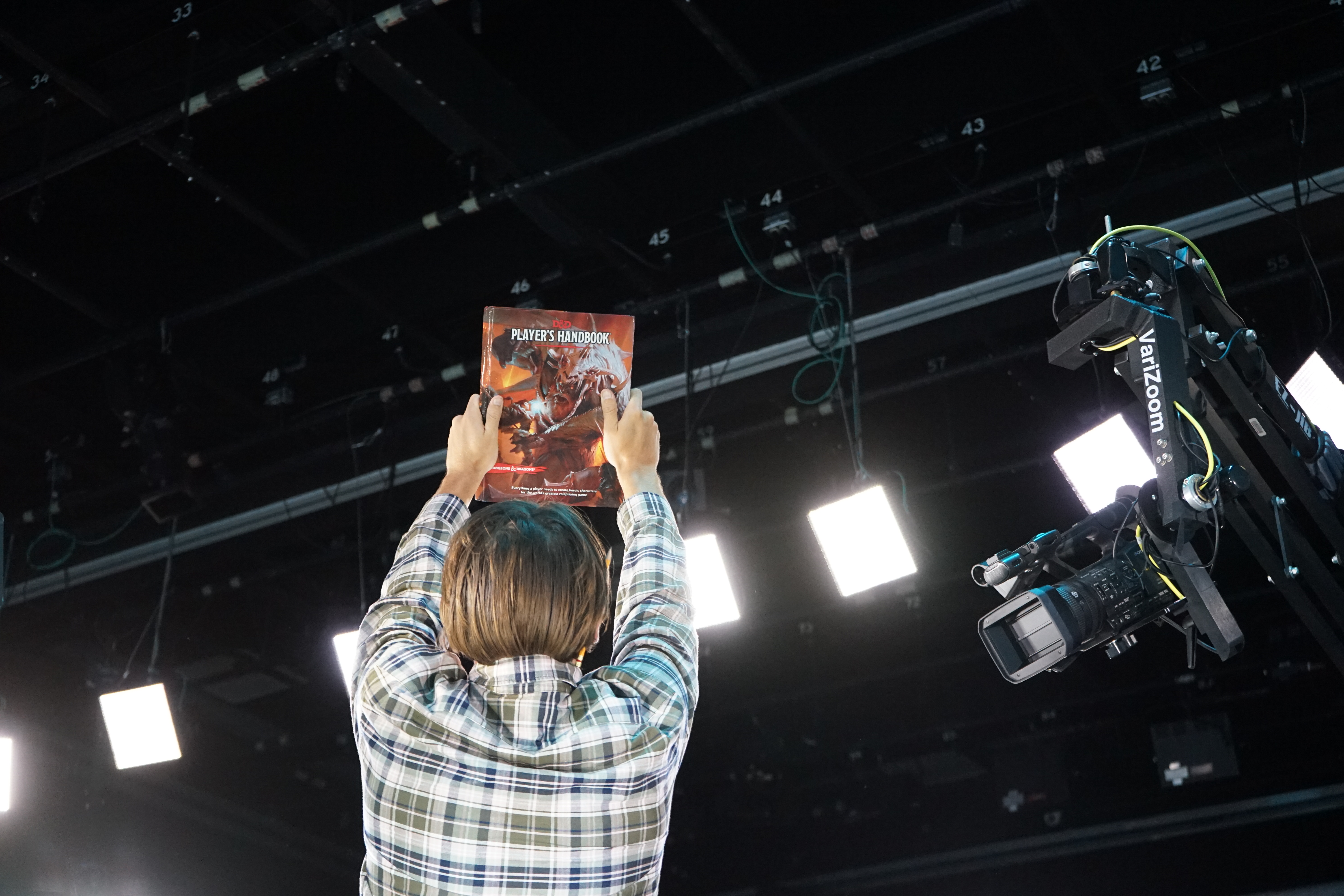 A Dungeon Master in Master Control

Meet Gabe Killhour. He is one of five technicians in ‘Ōlelo Community Media’s Playback Department. He responsible for physically transmitting every program that comes through our doors from our facility in Māpunapuna to your television. A Playback Technician’s job is no walk in the park. Surrounded by a sea of computers, converters, tape decks, hard drives, and video monitors displaying all of our channels’ live broadcasts, Gabe is on call and standing by, ensuring that every show is aired without a glitch (like the audio of a show dropping out or the screen going to black all of a sudden). It is necessary for Playback Technicians to be keen and aware of multiple factors all at once and ‘Ōlelo’s is no exception. 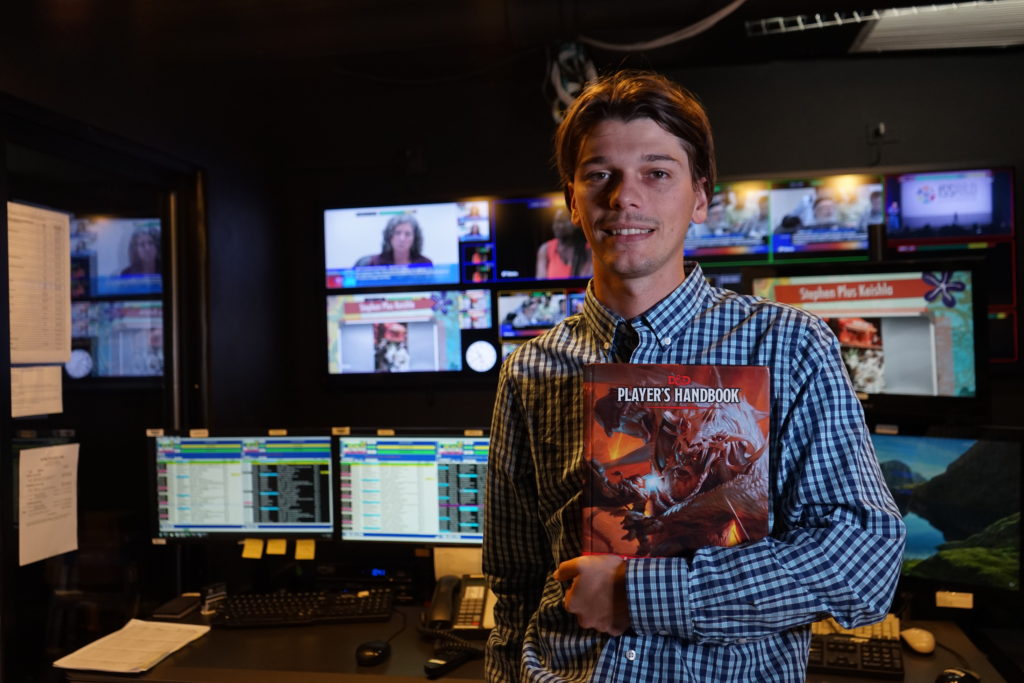 So, how does a Playback Technician spend their free time after standing guard at the Fortress of ‘Ōlelo Programming? For Gabe, it’s producing his own ‘Ōlelo show. It’s called Advanced D&D: The Movement (AD&D for short) and it showcases real time game play of the popular role-playing game Dungeons & Dragons (D&D). The concept of the game is as follows: You’re a member of a team of adventurers in a fantasy-like realm on a mission to find buried treasure. In Dungeons & Dragons, there is no board. Everything is played out entirely in your imagination. The moderator/referee of the game, called a Dungeon Master, creates the setting, characters, and rules. The players decide what actions their characters take throughout the game. A game could last for hours, weeks, or even years.

Advanced D&D: The Movement is a series of specials and shorts shot with 3 cameras, utilizing multiple angles as the game plays out. Gabe takes full advantage of chroma key (“green screen”) technology as he immerses his players (who are actually sitting around a table in a typical-looking conference room) into lush, fantastic locations. Each “episode” features highlights from Gabe’s team’s D&D sessions; they play (and record) almost weekly for about 5 hours. Many of Gabe’s team of players also double as his video crew – David Look as Producer and Camera Operator, Grant Okazaki as Studio Technician, and Dustin Malama as Camera Operator.

Dungeons & Dragons has been around since 1974. More than just a game, D&D allows players to subconsciously gain life skills. Although you are playing as a fictional character in a fictional setting with fictional laws, you are continually practicing the virtue of patience by learning to emotionally heal from setback and defeats. By engaging with players with varying thinking processes, you learn to empathize with others. By advancing in the game, you are forced to utilize the abyss of your imagination and take it to seemingly impossible places. And most importantly, in Gabe’s case, you learn to truly shine as part of a team, which just so happens to be one of ‘Ōlelo’s core values.

You can watch an episode of Advanced D&D: The Movement HERE and view their website HERE. 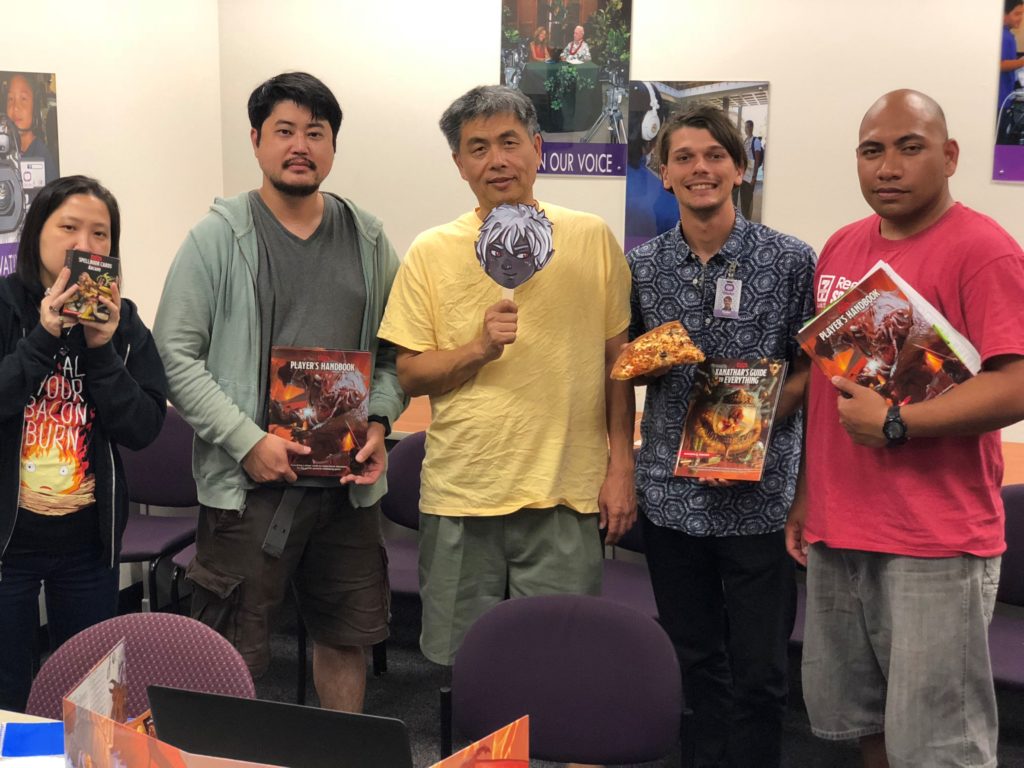